Anyoner have a set of "study Plans for Redmond's WHISP??

I'd like to build a long/skinny skiff for my NOS Minn-Kota trolling motor to push about for crappie fishing & wonder if anyone has a set of "study plans" for the WHISP (or something similar) that I can look at.

What I'm looking for is to NOT have to try to build something as complicated as the WHISP but something simpler (I fear that my "minimal woodworking skills" are not up to building the lapstrake hull of the Whisp.) that will be as easy to drive with a trolling motor, that will "fish" Darla & I comfortably, set/tend a trotline or set hooks & that I can quickly complete with "tack & tape" construction & that is light enough for the 2 of us to "cartop" on my old MB S-type sedan.

Wood boats are not complicated to build. It is just one piece of wood attached to another one. Keep repeating the process till you have a boat to use.

Not sure where you are but in my state ( Florida ) any boat with any form of mechanical propulsion needs to be licensed and registered. If this is the same in your state for a home built boat keep all the sales recites to show the tax collector when you go to register it.

YEP. Here in TX all homebuilts must be registered if they are powered with any sort of motor, including a trolling motor.
(Our local game warden's office is generally very helpful in getting such homemade craft numbered/licensed/etc.)

As to your other comment, I'd sooner not have to "reinvent the wheel". - That's why I'd like to look at a study plan for Whisp or a similar long/slim/easily driven skiff, that is simple/quick to build with stitch & glue/tack & tape & that can be loaded onto our roof-rack/car by the 2 of us.

He does a nice job. Tell him that Kayak Jack sent you.
J

He does a nice job. Tell him that Kayak Jack sent you.
Click to expand...

I was getting ready to suggest the same thing and for him to checkout the Mini Skiff or the Square Back Stalker that Matt has plans for.
C

I wanted to see what this Whisp looks like and in the process found a similar stitch-and-glue craft called the Otter 16. There are free study plans and user pics here:

THANKS. = That set of study plans is precisely what I wanted to look upon. =====> I was looking for suggestive ideas of a vague/general sort
(I will likely build something quite like her but NOT a replica. - For starters, my version will be set up as a power skiff for a small OB/Minn-Kota 40# trolling motor but still capable of being rowed when necessary, rather than primarily being suited for rowing/sailing.)

Looking at the plan, it makes me wonder what it would be like sporting a 1.5HP Palmer slow-speed IB engine.

jfreemanTMN said:
Looking= at the plan, it makes me wonder what it would be like sporting a 1.5HP Palmer slow-speed IB engine.
Click to expand...

It might be like, cool, man. Guess you'd need a small console in there, and an easy to remove prop for when you want/have to row. Wouldn't want the drag on that sleek hull!

BTW you're welcome, best of luck with it
J

cliff58 said:
It might be like, cool, man. Guess you'd need a small console in there, and an easy to remove prop for when you want/have to row. Wouldn't want the drag on that sleek hull!

BTW you're welcome, best of luck with it
Click to expand...

Fwiw, I was thinking of perhaps a Chesapeake Bay work-skiff style with a "pull-up" & store aboard shaft/prop arrangement. - A similar rig using a 1920s era "demountable" 2HP MoToGo IB engine might work, too.
(An old friend from The Eastern Shore of MD still had his grandfather's 2-horse IB, years ago. - The skiff that it powered "rotted out" shortly before WWII.)

A rig like that could pull a couple of water skiers! ;-)
S

I like those old inboards, but remember that they are heavy and run at low rpm's (600 to 800) so they need a large diameter prop for you to make any headway.

Actually, the old 1.5 or 2 horse, one-lung, IBs are NOT that heavy, though they are just not fast.
(Otoh, a traditional-style fishing skiff isn't about speed, imo.)

I just like to hear them putt along. Also a long/slim hull is their forte = Simply NIFTY, imo, too.

I like to listen to the old, heavy flywheeled engines oo. My granddad had a John Deere D, and that engine burrowed itself into me.

Years ago, I had a Suzuki Apache dirt bike - 400cc, singke cylinder. Had like a piston the size of a 3 pound coffee can. I added a steel ring around the flywheel, and it converted the power curve to the left. The engine reflined at 5,000RPM, but at just 2,000, I could lock the front brake and it would shid the wheel along from a dead start. Probably would have pulled a 10"single bottom plow?
S

guess it depends on your definition of heavy, I was comparing to modern engines. 3Hp weighs 220 lbs. A 1 1/2 weighs 140. I was wrong on the rpm's fpr Palmers, other engines of that era ran a bit faster 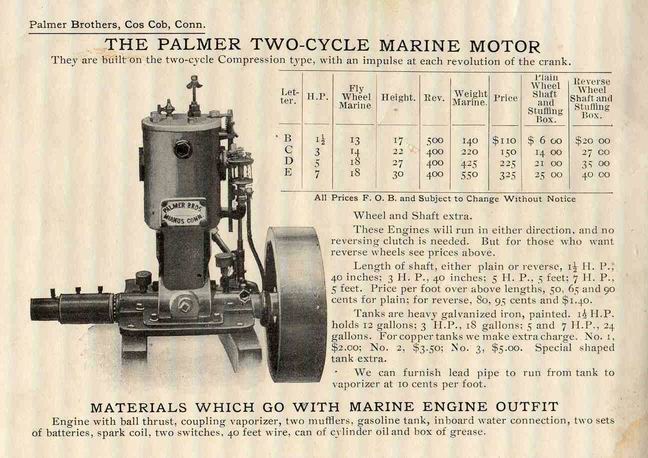 Thanks, Jules. Very interesting. I like the separate screw-down grease cups on the main bearings. Modern 2-cycle engines lube the msins from the fuel-oil vspor in the crankcase. Speaking of which, there doesn't seem to be a crankcase on that engine? It looks too narrow to hold a crank? What am I missing here?
S

that what happens when the illustrator and ad agency do not know what they are advertising. Obviously there has to be some case below the shaft or it wouldn't go round and round. Do an internet search on "palmer inboard engines" for more realistic photos.
At this point in time, there were no ball bearings, bearings were poured babbit. Greased was squeezed between the surfaces via the grease cups and a hole in the outer bearing.
Since you are a few months older than me, you've likely poured a few of those bearings yourself.
K

Well, I didn't pour any of the babbit, no. In my day the bearings were made of whang leather. Later on, during the bronze age, we used bronze, of course.
Last edited: Feb 24, 2018
J

One of the things that I find interesting about the period of 2 and 4-cycle slow-speed engines is how many early marine engines were actually hand-built by the end user, i.e., the owner of the boat.

Btw, my Uncle Ollie from Grove OK was a blacksmith, gunsmith & inventor . = In 1903 a rich guy from Tulsa had "car trouble" with his nearly new Winton Flyer in Delaware County & asked my uncle if he could repair the car. = My uncle said yes & the customer said that he would go by train on to Missouri and that he would return to Grove in 3 weeks.

Sure enough when the customer returned, the car was repaired. The man paid his bill & headed out of town.

About a week later, my uncle rolled out his replica of the customer's car. = YEP. My uncle had taken the customer's car apart & duplicated it.
(As far as I can find out that was the only car ever built from scratch in OK and over the next decade, my uncle made numerous marine engines for customers based on that home-brewed/copied engine.)
Note: the 1902-04 Winton engine was about 5HP at 800RPM. - It was a one-cylinder with 2 sparkplugs & was started by winding up a crank, very much the way that an alarm clock is wound.
(Once warmed up, the Winton engine would run on gasoline, kerosene, coal oil or mixtures of the 3 fuels.)

Note: In 1942 my uncle gave his car to the WWII scrap metal drive, along with every piece of metal that he could spare from his blacksmith shop..