Seminole Ranch..March 3 to the 6th.

Well the gang and I went back to the Seminole Ranch for a few days of laying back , camping and enjoying life. 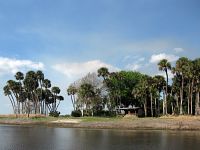 We have been having a few cold spells and wet spells so the weather had to improve and the guys wanted to get out for a few nights.
I contacted the St Johns Water Management District to see if the Seminole Ranch was open on the 3rd of March to the 6th and it was so I reserved the ranch for us.
March 3..Tuesday arrive there , A.M. and set up camp then relax. Campfire at night and watch the moon.
March 4 ..Wednesday , have all day and night
March 5...Thursday , Have all day and night
March 6...Friday pull out in the A.M.

As luck would have it the weather report for the three days was to be in the mid 80's during the day and the low 60's at night , just perfect weather for a get away. To top it off the moon would be full and rise when the sun was going down , stay up at night and set in the West when the sun was coming up , just perfect conditions.
Plus the vegetation ( Trees ) are coming out in that really nice Light ( mint) Spring Green color which makes everything look brand new and makes a person feel good to be there enjoying it.

I pulled off of SR 46 onto Hatbill road and right behind me was a silver Dodge truck tagging me , Dam , it's Joe , talk about good timing. We arrived at the camp and Van was already there , then Harry , Ray and Ou-ter ( Harry Jr.) showed up followed with Mac.

A little later Dapper Al arrived with his son and grandson and since they had different plans they only visited.
We got our respective camping arrangements set and unloaded a lot of fire wood for later on.

In the evenings we had some Sand Hill Cranes visit us and they would come up about 2 or 3 feet from us looking for handouts. They struck out since the Venison Summer Sausage Mac brought was just to good to give away so we enjoyed it as snacks and it was some sort of delicious.

At night the fire was cheerful and the moon was so bright it actually made the fire look weak and not as bright as a fire normally is.

The weather changed and the wind came up and it blew some sort of hard , it made the two Palm trees I had the hammock attached to sway which made the hammock go up and down almost as much as the rain fly was when trying to touch the ground or take flight.
Mac told me later on he thought his tent was going to blow in on him , the up side was no bugs when that wind was howling.
Mac had his tent set up in the middle of the open area between the shelter and the water. 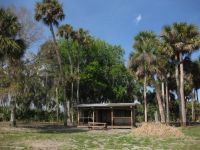 The mornings after the wind died down was foggy with some really thick fog , the condensation on the trees leaves would form drops and hit the rain fly making me think it was raining , which it only tried to do the morning we left which was Friday.

Harry , Van and Ou-ter left Thursday morning since they had other commitments to attend to leaving Van , Mac , Joe and myself there for Thursday night.

We had a full moon with a slight breeze and a good time around the fire and got to bed rather late but we did cure the worlds problems before calling it a night.

I forgot to mention there were some Bull Frogs across the little slough in the river by us that sounded off each night. If the legs on the one Bull Frog would match his velocity and ability to croak to call all the lady frogs his legs would have to be the size of Turkey drum sticks. :lol: I would listen to him and dream of a platter of fried Frog legs.

We did manage to get some exercising in thanks to our friendly camp Armadillo by chasing him around the camp and he would return the favor during the night by sounding like a miniature bull dozier while you were trying to sleep.
M

Thanks for that report Chuck. Sorry I couldn't spend every day with you guys, but the dropping in of my son and grandson kinda changed my plans. It sure was good to see everyone and they all look so well preserved that it's got to be the canoeing and time spent out doors that is keeping them all in such good shape. Thanks for making the camp site available. Hope some of the guys got in some fishing. That site looks like there are tons of fish just under the surface just waiting for a tempting fly to come by and then get hooked. Told my son to give me more warning next time. Dapper Al.
O

Al...
It was nice that you dropped by to visit so all of us could see you and we especially enjoyed talking to the Boy's , they are some nice gentlemen and all of us appreciated meeting them.
It's always a pleasure when a person comes out there to enjoy camping with the gang and if they are not able to camp due to family matters we know that family comes 1st every time. So they do the 2nd best thing , drop by to visit when they can and if they include family members with the visit then that just makes it a lot better.