I don't have one but I do have one with skinny tires. In the interest of avoiding the "holy-trinity" of death for middle-aged white guys:
you know ... all good things in moderation.

David.... Nice to know you are still kicking around out here. Funny thing you mentioned the Fat Tire Bikes. Mine is coming here on the 11th or so the company I got it from told me.

oldsparkey said:
David.... Nice to know you are still kicking around out here. Funny thing you mentioned the Fat Tire Bikes. Mine is coming here on the 11th or so the company I got it from told me.

and this forum will need pictures of your 'fatty' when you get her!
O

Here is their picture of it , sorry it's so big but it's what I have to go with. 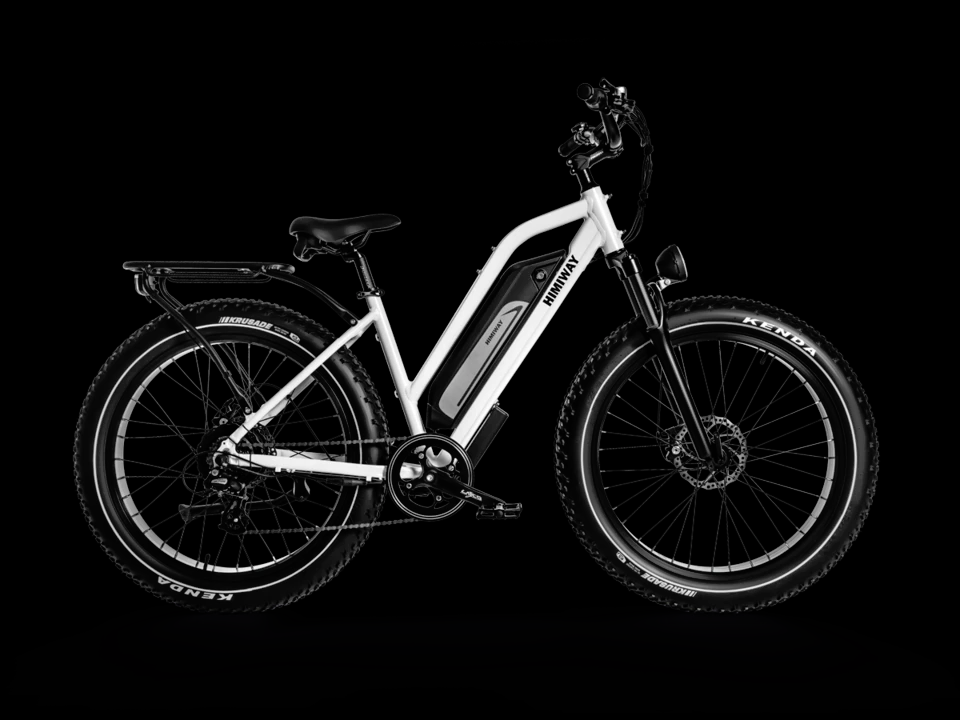 Biking is a “good to be doing” exercise. Beneficial for both mind and body.
T

Well It arrived on the 8th of December , was promised sometime in November but what the heck , it got here on my Birthday. Happy Birthday to me and It knew what I wanted . lol.
Major job was getting it out of the shipping box , it was packed solidly and really well. You don't just open the box and pull it out , I cut one whole side away to get to the bike and parts. Then it's taking each part out ( unwrapping ) and figuring out the puzzle on which is next and what is holding it in there. Got it almost together yesterday except for the fenders , pedals and some fine tuning. They furnish a bike tool to help in the assembly and later maintenance. Heck they even include one of their Hats besides the charger , cables and keys.

Finished the assembly today and managed to pedal it around the yard.
It pedals like any normal 7 speed bike , except it leaves a bigger foot print. The tires are humongous things ( 26 x 4 ) and look like they belong on a scrambling motorcycle.

Put it in pedal assist #0 which means everything is up to the rider....... Got curious and started out with a slight push on the pedals and then gave the throttle a twist.......It felt like it was going to jump out from under me and before I knew what was happening I was zipping along. OK , time to stop.......
Starting from a stand still with just a slight twist of the throttle and I was going along at the same as pedal assist #1 at 10.8 mph , coasting along at a constant speed without pedaling a bit or having to go down hill. If anything I was going up a slight rise , enough where a normal bike would have to pedal. I know I have pedaled up it enough times.

Now I understand why folks like them and are able to pedal 20 miles or more and not think anything of it. They say by using the pedal assist you can get up to 60 miles off a battery , 30 when just using the throttle. ( some folks on YouTube claim to have gone further )

They say they are good for older folks and people with heart problems , get some exercise but not overdoing it. I can see this old fart doing a lot of running around to get incidentals and using it in place of the car. Have to get stuff , why not get it and have some fun doing it. Put in my order for a front basket they have specifically for this bike ( Step Threw Cruiser ) and the Normal Cruiser.

The younger generation likes them , the youngest daughter and husband both have them. Similar electric , fat tire , bikes but by a different manufacture. They are in Canada and said a 20 mile ride is normal for them.
K

Now you can peddle your fanny around town.
O

Kayak Jack said:
Now you can peddle your fanny around town.
Click to expand...

Been doing that in the past but now I can take all of me and coast up hill if I want to.
O

Peddling this one with the pedal assist is a whole different world. A normal bike how hard you peddle and what gear you are in determines your speed. On a bike with peddle assist all you have to do is maintain a peddling rhythm and it can be a slow easy one. The bikes speed is regulated by the peddle assist level the bike's controller is in.
I peddled at the same rate in the different settings and increase my speed by 3mph with each increased level. The bike was originally set with levels 0 to 5 from the manufacture ... 0 being the one where the 7 speed shiftier is needed to control your speed like a normal 7 speed bike.
I readjusted the levels of peddle assist from 0 to 9 which is the max the bike can be set at by the owner. At # 1 I was able to easily peddle and have a max speed of 7.8 mph. I got up to peddle assist # 6 ( 22 mph ) and decided to keep 7 , 8, and 9 for a later date after I get more familiar with the bike , a lot more familiar. The reason is with each increase in peddle assist you can feel the bike's motor kick in ( increase ) something like a car when hitting the passing gear.
It's going to take more road time before I attempt the dirt trail to the river and surrounding woods.
K

When I looked back at the Whizzer motor bike I rode as a 14 year old in the early 50s, I realize that I am lucky to still be here. The bike cruised at 35, and topped out at 50. BUT, it still had only the one brake! Your bike has two brakes. That’s a large advantage. The front brake produces twice the braking effort of the rear. Also, your fat tires have a larger footprint, and can impart more traction to braking than I ever had.

All I am doing or have done so far is trying to find a easier way to make it down a back woods path ( old R/R fill ) that's hell on peddling a bike due to the sugar sand. It's about 3 miles one way to the river to goof off , fish , camp and just chill. Plus , I'm not getting any younger , anyway it sure feels that way.
Last edited: Dec 13, 2020
K

Looking down the road and thinking that you leave here the same way you arrived , Bald , Toothless , Naked and Broke. Since I'm approaching only the bald stage , everything has slid over to the sides. I was thinking you can't take the cash with you on the final journey. Any left behind the wife and kids will spend so why not use some for myself.
As the old joke about the guy being of sound mind and passing away , he spent all of it.
K

You figured it out. And, the part that you plan to share - share it with them while you’re still alive to enjoy the pleasure of giving.

Probably, none of us consider ourselves to be rich. But, when we look around at most of humanity that has come before us, and living today, we’re pretty well off. We can spare some to share with family, and friends.
O

Kayak Jack said:
You figured it out. And, the part that you plan to share - share it with them while you’re still alive to enjoy the pleasure of giving.
Click to expand...

In the hospital before my mom passed away she handed her different diamond rings to each of her granddaughters. Laura & Mary asked her why now and not later......... She told them , "It's better to give with warm hands then cold ones"
Like her I believe in sharing now then later.
K

Your Mom was right, and said it best. Moms have that reputation, ehh?
O

Went for a bike ride today , really enjoyed covering some territory. Even the inclines were enjoyable since the bike did most of the work by kicking in with the electric motor. Had one area I wanted to just ease along so I killed the motor ( set peddle assist to 0 ) and peddled using the 7 speed shifter.
The crowing glory came when I was 4 miles from the house and heading home. I had a really strong wind blowing directly at me. Normally I would of been fussing and cussing but not anymore , just cruising along. As long as I peddled the motor kicked in and did most of the work , stop peddling and just twist the throttle. Blow wind , Blow I don't care anymore. Now I see why they say the bike is good for the Elderly ( Seniors ), Disabled or physically challenged.
Thinking about safety , I took a break and got myself a new Bike helmet since my old one was worn out. I already added a rear view mirror to the left side so I can see anything behind me. I added a cell phone holder to the handle bar so I can use the phones GPS if I want to.