Glenn and I hit the river about 4 yesterday,wind was blowing but it sure was cooler than Monday.
Paddled up river a ways set up and put out the baits. The river was up and started falling while we were there. That is not the best fishing but we were there and enjoying it.
Had a mixed bag caught several twisters,nothing big enough to keep, then started catching gasper ,several small ones,the gar were driving Glenn nuts hitting running and spitting the bait
He finally landed one .
Several folks have informed me that back strap from a small gar made excellent poor boy shrimp
I grabbed the machete out of the boat and pulled the back strap out. Glen was surprised ,and said that was easier than cleaning a catfish. Tonight I am going to try the meat fixed like shrimp cocktail I will post how it turns out
Back to fishing, I got a pretty good hit,set the hook and had the rod dang near jerked out of my hand then the drag was screaming. after a good fight I landed the biggest gasper I have ever taken on the Brazos.
I had a little ten lb scale and he bottomed it . Glen and I figured about 15 lbs. 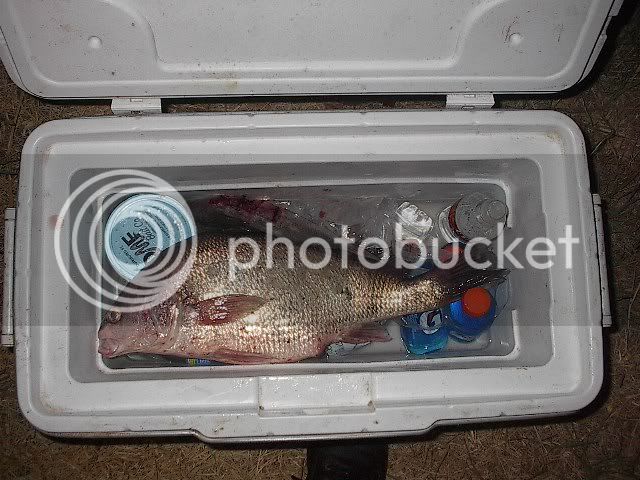 That is a 50 quart chest

The front blew threw cooled down a little and was a great paddle in .
Was a good day.
Ron
H

a 15 pounder in fresh water. Great job mate. Very few of our fresh water species even come close to that big.

Sure is an ugly bugger Are they any good to eat?
T

Mick
They are ok to eat but not my favorite,if you do eat them it is best fresh they seem mushy after being frozen.
We have some laege freshwater fish here ,gar over 200 lbs ,catfish get to a hundred plus,striper 50 lbs,
Lot of good fishing here.
Mick check out the way I have rigged my yak for fishing (Brazos Queen) tell me what you think.
Ron
You must log in or register to reply here.
Share:
Reddit Pinterest Email Link
Top Bottom