First build, by hand and by eye

I really like that term, "by hand and by eye". I hope I'm using it properly here, l
I don't take it to mean no power tools or measurements. Just that I'm not following any plans or drawings. Oh, in the beginning I thought I would, but along with Cheap Canoe and the LSU plans, I found this and a few other forums that quickly taught me that there's much more to boatbuilding than following plans. Keith and seedtick's work in particular is really inspirational. Building a model out of poster board first really got me to understand better how side flare and the shape of the side panel's bottom edge affect rocker, and showed me that I needed to cut 1 inch less of an arc on those side panels than what my best guess produced. After that I started making sawdust.

This build really began last June, but computer failure kept me from posting this and other problems delayed the work big time. Heck, there's mold growing on the wood and I don't even have a hull yet! Glad this one's getting painted.

Okay, so what I want is something about halfway between the swamp pirogue and the marsh pirogue. Perhaps I could call it a creek pirogue? 30 degree flare, 2 inch rocker, and 14 ft. in length with a 26 inch maximum bottom width and not too high at bow and stern so the wind won't turn it so easy. All on a budget of 100 bucks so epoxy and glass are out of the picture this time around.

Home Depot helped me out a little, the cashier asked if I found everything I needed. I said, "no, you don't have the spruce 2x6 that your website says you have, so I have to build my boat with this whitewood crap that will rot in a year or two". She took 25% off my entire total, which was for all materials except paint.

I started out ripping up the 2x6 for chines and gunnels 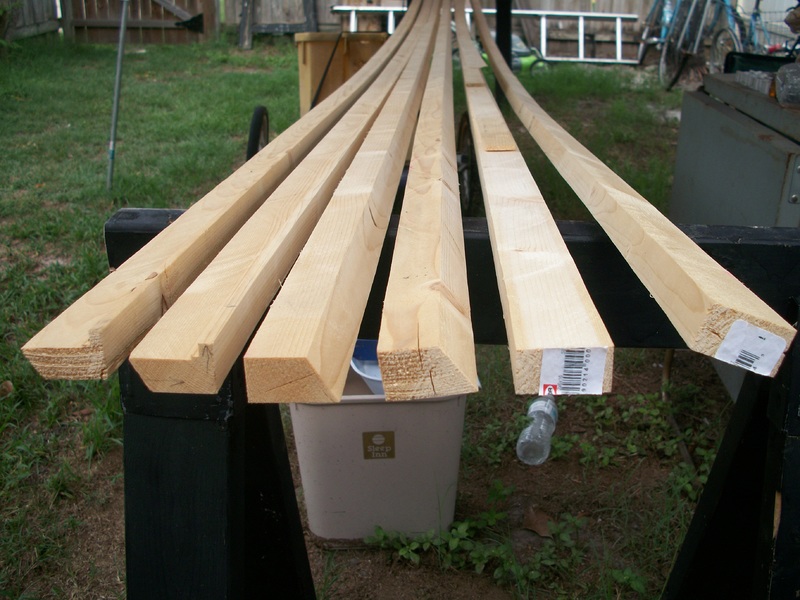 Next came marking out and cutting the " plywood" 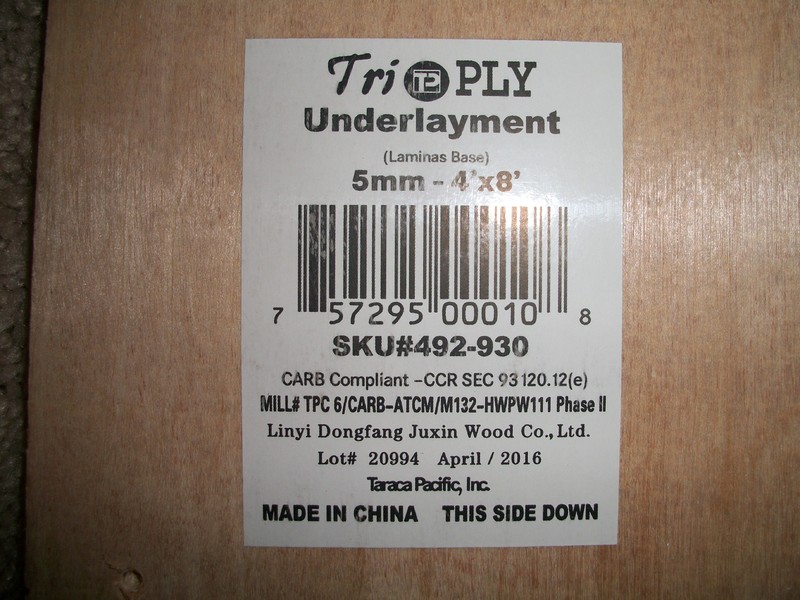 I'll try to describe the marking part. First screwed the butted panels to blocks on each edge, right where the gunnels will cover the holes. Measured 14' 6" and cut the other 18" off the end. Drew full length lines 10 3/4" from the sides. Marked a center line 7'3" form the end. Drove screws at the two points where the lines intersect. Went to each end and made marks on the 4ft. edge at 4" and at 15 3/4" from each corner. Laid one of the chines against one of the screws as a batten and arced it so I could clamp the ends down right at the 15 3/4 mark, and marked along the batten for the bottom side panel cut. Then clamped the same batten in the center even with the edge of the ply, and moved the ends down to the 4" marks and clamped there to mark the gunnel edge of the sides. Lastly I marked the angled ends where the stems go but can't remember exact measurements. I think it's a 40° angle.

Next came butt-splicing the side panels 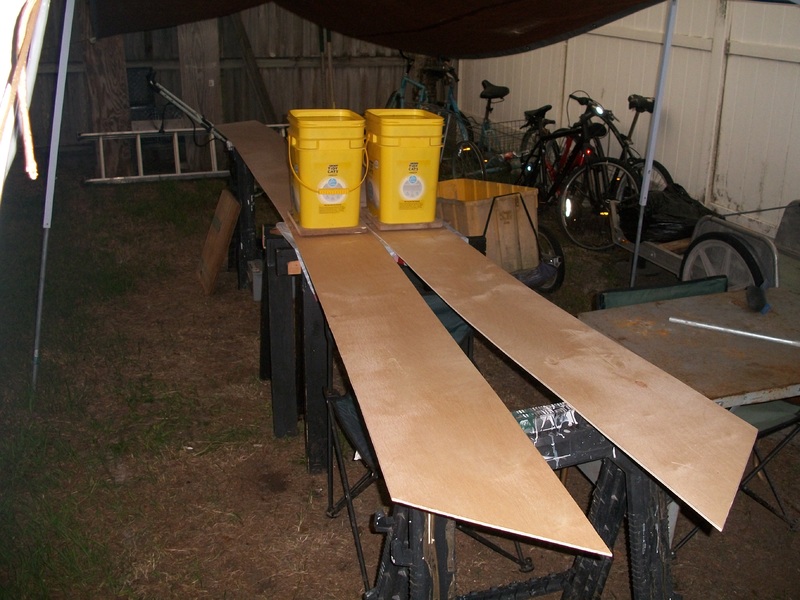 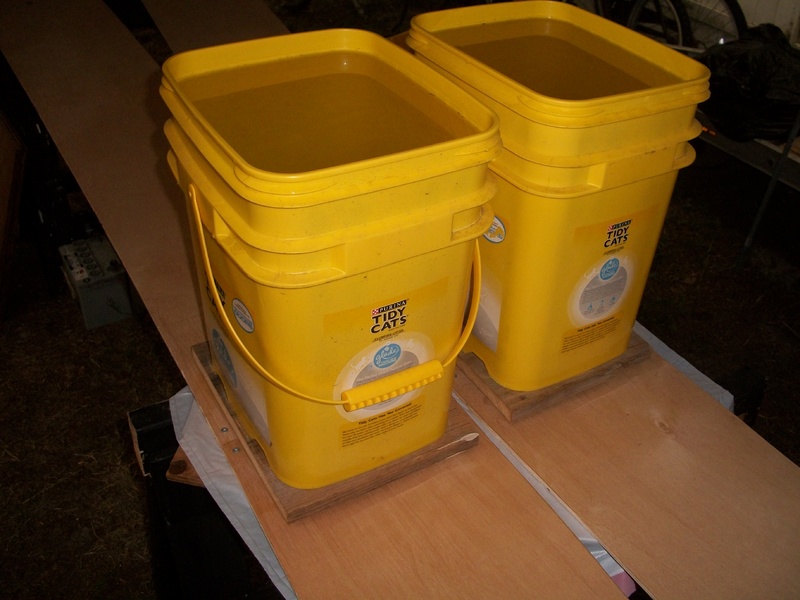 Putting the sides together and setting up forms 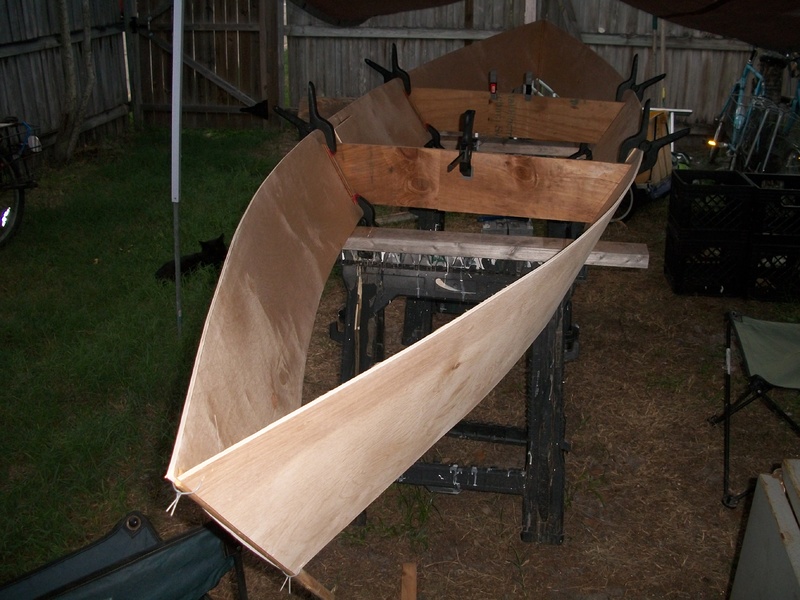 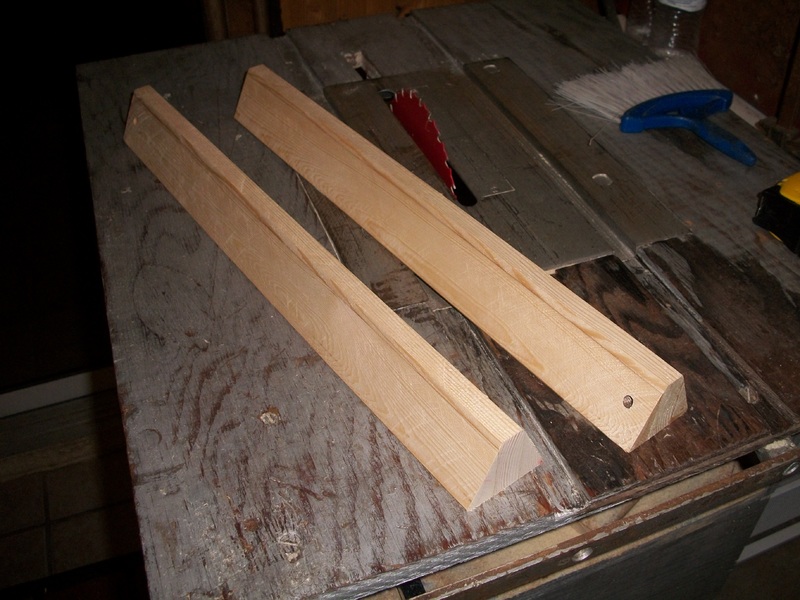 First stem is in 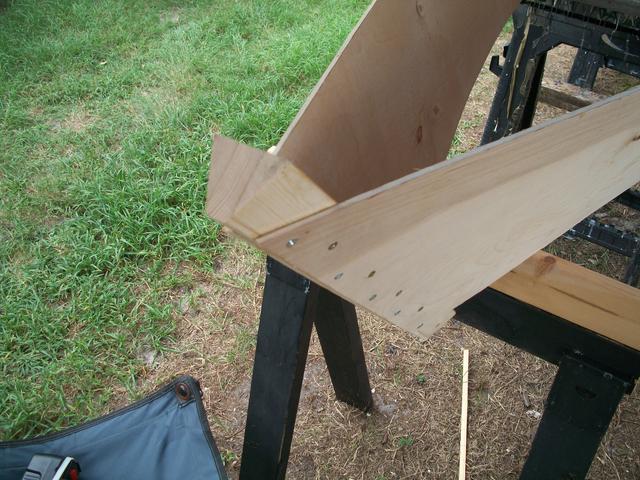 Then 35 days or so of seeing rain like this whenever I want to work on it. During that time my computer died 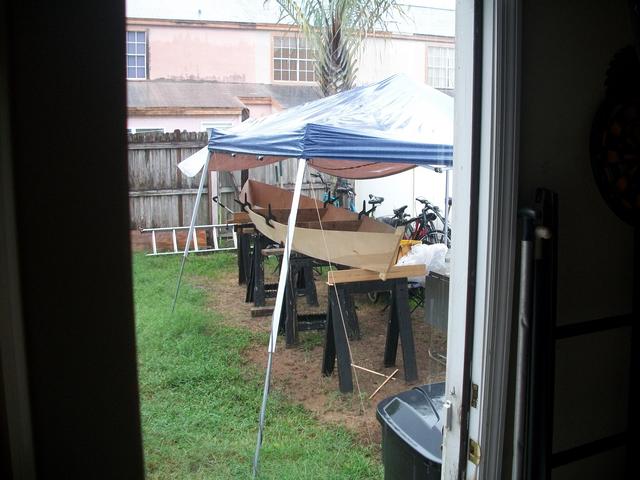 After that I got the other stem in and flipped it over, but look at that poor wood 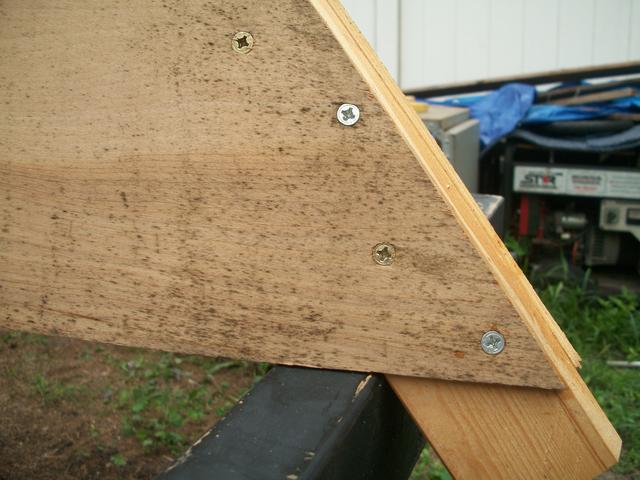 Then a storm took the canopy/tarp away and I gave up for the summer and brought the wobbling wood into my back room for protection, which is actually a walled off patio. It was just too hot and wet out there with no rain and sun protection. With the rains, 'canes, and other issues, that was the end of it for 2017.
Last edited: May 12, 2018
S

Looks like you're doing pretty good. Grandpa was a carpenter and used to say that knowledgeable folks would ask "Who built that ?" Not "How long did it take to build that."

Just a thought, be sure to kill the mold before you put any kind of finish on it

Congrats on the good start. Can't wait to see it slimed.
C

Thanks guys, and slimed it will be one day. Have the money to renew my license set aside already to make sure it will!

I've been wondering about the best way to kill that mold. Lysol? Bleach water? Kilz? Maybe all of the above to be sure? Wouldn't want to do anything that would hurt the adhesion of glue or paint. I see I forgot to mention I'm using Titebond 3 for the gluing.

Anyway, not long ago I got a tarp big enough to shelter the build pretty well, and got the moldy oldie back outside where I can work on it on Valentines Day. Seems kind of fitting to do that on a day when we pay more attention to those we ignore too much.

Next up was the tricky business of fitting the inside chine logs between the stems. This did not go very well for me. My cuts were not precise enough to match up the compound angles well and somehow the chines ended up about 1/8" short. So, where the chines meet the stems I used a dab of PL Premium, but the titebond on the rest, and I butted them up against one stem and started clamping and screwing from there. Now I'll have to cut another thin piece of wood to glue in between chine and stem at the other end. They say paint hides everything so I guess it'll be OK 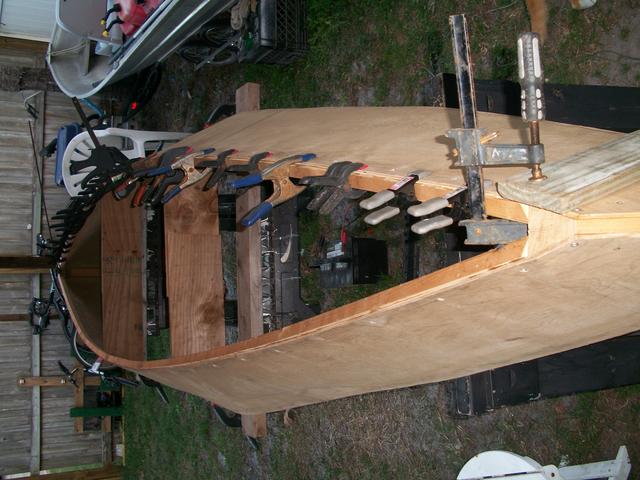 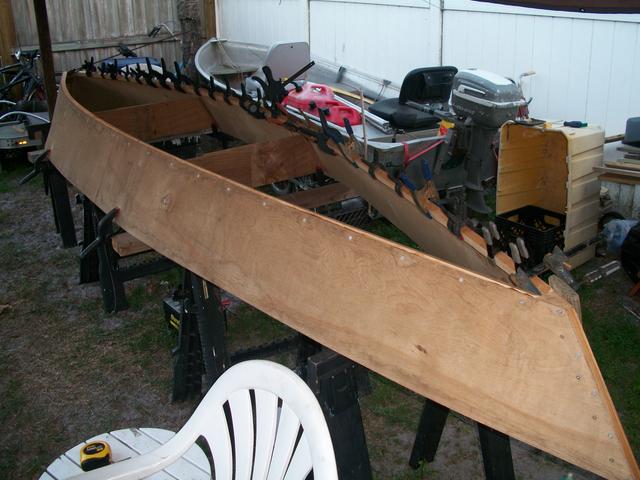 The curve of the side panels looks anything but fair after all the sitting around, I sure hope adding the gunnels will smooth them out nicely.

And that is where the build stands as of this writing. Future updates *should* be much more timely!
Last edited: May 12, 2018
S

some folks put the bottom chine on the outside, makes it a lot easier

Boat looking good. I think the size and shape you chose is about ideal for a fishing pirogue.
If you are not satisfied with the fairness of the chine, couldn't you move your stations to adjust it before attaching the floor? Thin plywood and butt splices make it harder to form a fair shape of the sides. I would guess adding the gunnels will help, if you do it before installing ribs or other bracing.

I think you'll be very happy with the performance of that design. There is something about the graceful sweep of the bow and the stern of a nice pirogue that appeals to me. Not using plans.................People here know that I NEVER use plans. That's part of the fun for me, too.

Fitting the inside chines is pretty tedious. It is really a very hard compound cut to get perfect. Don't sweat it. Old saying "Caulk and paint make it what it ain't." You'll do better on the second one......and the third.......and the fourth. Plenty strength in that area even if the cuts are a little off. Much of the strain of a boat is in the center section.