Swallowed my pride and chose spin casting gear and worms for a trip to a part of the lake I've never been to. 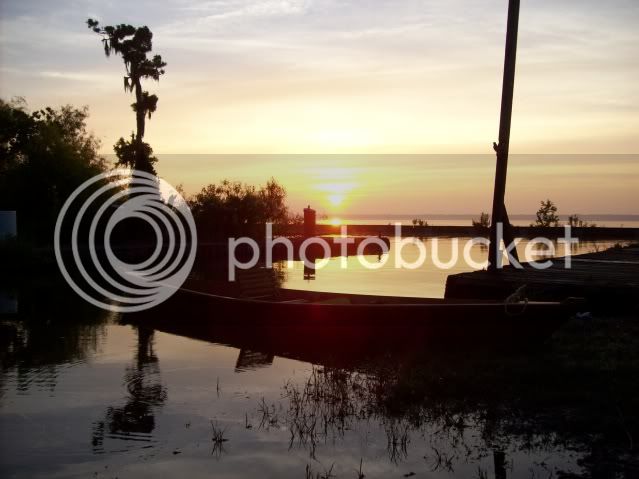 Fished among the cypress trees for the first 45 minutes with no luck. Paddled on down the west shore to an up-scale neighborhood along a man-made canal. It's a half mile of "camps" shoulder to shoulder with the canal passing on the back property line. Dug a canal through deep swamp , threw the dirt up on each side and sold lots for $20,000 to $50,000. We MAKE real estate here in La. :roll:

This is what passes for "roughing it". 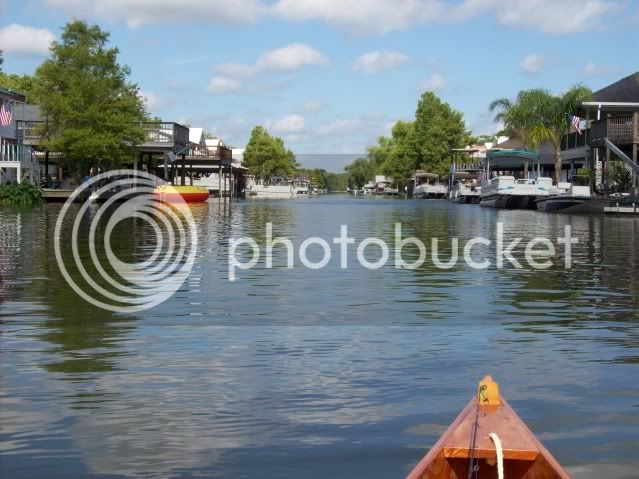 Many of those camps had wharves that cost way more than my house.

Went further down the shore until I got to an oilfield canal. Bumped a small jig tipped with worm off the bottom and caught this little fellow. 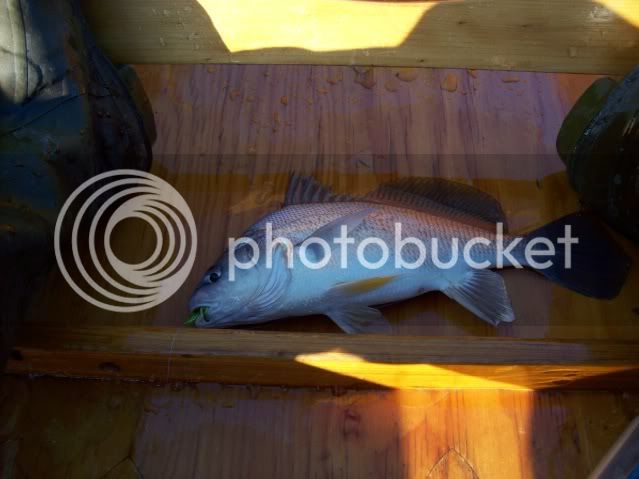 It's a gaspergou , a type of fresh water drum. Threw him back to get bigger. Switched to jigging in the middle of the canal and caught this small catfish. 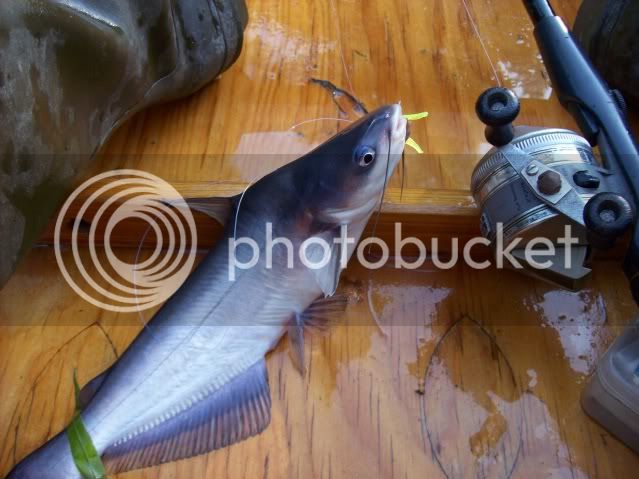 The fishing slowed way down so I did a little exploring. I found this slough and went back in there about 200 yards before grass and debris blocked my way. 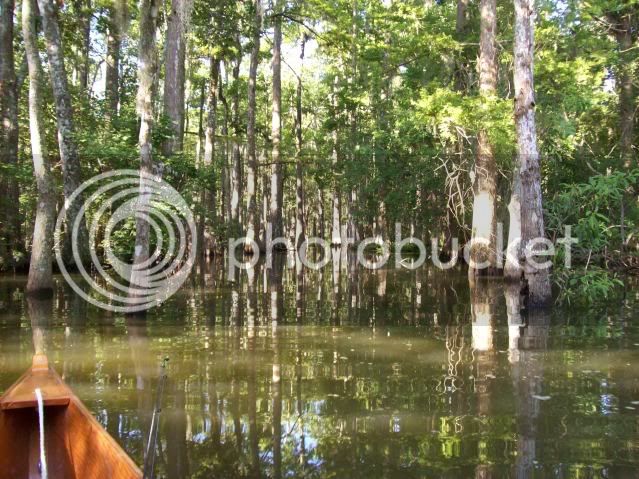 The wind picked up so I figured I'd call it a morning. Started back on the 2 mile paddle as the lake started kicking up. 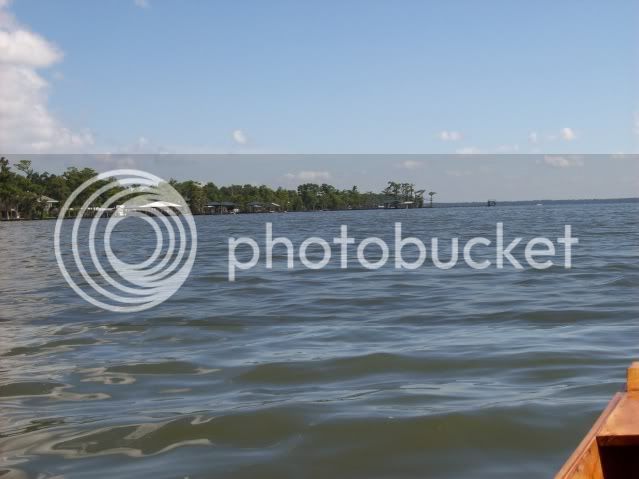 As I came in to the landing, there were a few whitecaps starting to come in. This time next week, Piper and I will be on the opposite side of the lake for a couple of days of goofing off.

I sho am glad ya'll take yer digitized cameras along 'n share the pichurs with us. That first one iz special. Thanks fer lettin' us tag along.
B

bearridge said:
I sho am glad ya'll take yer digitized cameras along 'n share the pichurs with us......[snip] Thanks fer lettin' us tag along.
Click to expand...

All that water is fresh? :shock:

Great piccies and thread mate. thank you for sharing. Your first fish looks a little similar to a salt water species we have.
J

Yeah, Mick, it's all fresh water. The lake is 13 miles long and 2.5 miles across at it's widest. Lots of water to paddle, eh? I usually like to get off the water about 10:00 AM as it gets a bit choppy after that. If you get a wind blowing down the length of it, you can get 2.5 foot whitecaps in a hurry- not good in a pirogue.
Joey
K

When you come to Michigan, I'll show you Gitche Gumi (Lake Superior), about 308 miles long, and average of about 80 miles high. About 1320 feet deep. Then, I'll show you the other Great Lakes.
B

Good trip and pictures. Glade you got out before the lake got bad. Once heard more people have drowned on Verret than any other locale waterway, because it gets so rough. Don't know if that's true, but I have seen it bad enough to make a believer out of anybody. Did you catch the catfish in Michelle Canal? Looks like Shell Beach Landing to me. My brother in law had a camp on Shell Beach Road. Fished the area, with my son, since he started fishing. Many memories and lots of fish. Thanks for sharing.

Yeah, beekeeper, that 's the Shell Beach landing and I fished in Michelle Canal ( that's what they call it around there). I've heard of a few people that have drowned on the lake. It's so shallow that it really gets rough fast. The fishing around the lake has really suffered since Katrina, Gustav and especially the salvinia that is taking over the swamps.

I don't know when's the last time you went back there, but I saw where they tore down Chilli's Bar, the one out over the water. Sad to lose a landmark like that.

Don't put in at Shell Beach much. We got in the habit of using Mrs. Gaudet's in Piere Part. It is closer and we could always fish, even if the lake was rough. Love the area. Was Chilli's next to the launch? Every thing changes.

Yeah, bee, Chilli's was the bar over the water next to the launch. I had forgot about Gaudet's launch. Plotted it out and it's about 2 miles closer to the campsite than the planned route. I might have to check it out further. Thanks.

PS: I saw another one of those +/- 7 ft. alligator gars in Michelle Canal. I hadn't seen them around the lake in years and I've seen one the last two times I've gone out. It's kind of weird to hear the "HUH" they make when they come up for a breath. Catfish and drum make a grunting sound but nothing like this.
S

Nice pics and fish. Nothing wrong with spincasting, I bought some underspin reesl for the kids and occasionally find myself using them instead of my "grown up" spinning reel. Takes you back and keeps it simple, heck sometimes I even use their Roostertails. Back on track not wanting to hijack thread - good looking fish and I love that first pic with the boat on the water at sunrise - 8)
B

jdupre'
Mrs. Gaudet is super nice. She always helps you launch and park. Kind of folks I like to do business with. Last trip we saw a gator in Craker Head area that looked like something from a Tarzan Movie. It was sunning and did not move. Past by it with in 50' and didn't see it till we were past. Gave me the hebegebes. You wouldn't want him in your pirogue. Have only seen 2 or 3 gators that I thought were legitimate 10'+, this was one. You might want to look for him when you go, a real treat.

Joey, where I paddle the scenery is a landscape - maybe a pretty gal or two - it doesn't bite. T'ank ya ver much, I like trees n such.
O

Kayak Jack said:
Joey, where I paddle the scenery is a landscape - maybe a pretty gal or two - it doesn't bite. T'ank ya ver much, I like trees n such.
Click to expand...

Beauty is in the eye of the beholder.
There aint nothing as pretty as a Cypress at the waters edge with the wind blowing the old mans beard ( Spanish Moss ) and a sun rise painting everything in those warm morning colors , except for the evening which is about the same. Especially when the flight of Ibis or Herons are lazily passing overhead.

During the day just relaxing under one of the huge live oaks with all the shade it produces and judging the breeze by the way the moss moves sure is relaxing.

Then there are the nights with the moon ( a big ole night light) doing the same but in the cooler colors that go so well with the deep southern night and all the sounds the night critters make. Yep , even including the HUMmmmmmm of the Swamp Angles.

It is safe to say the south is not a landscape ( that's what we do around buildings ) but more of a comfortable/classic/secenic painting you can look at all day or night long and enjoy every moment of life.

Chuck.
By the way , I was reading where the swamp angles converse/communicate with each other by the beats of there wings. Most of the day in a doc reception/waiting room lets you read a lot of books. :lol:
R

Nice pics Joey. I had just pulled up the thread as my wife was passing by and she said "Ooh, pretty!"