Well the ole T-V had another hard day, Darrel and I went fishing and paddled about 10 miles ,jumped our boats over a bunch of log jams,back up paddle like he@@ and see how far up on the log you can go. we had a blast.
Caught a few fish to. 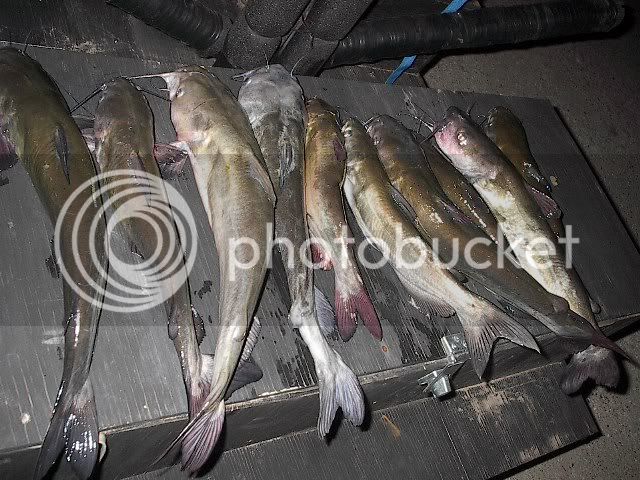 We slimed the heck out of them
Ron
O

It appears to me that you owe Darrel a thank you for him letting you take a picture of the fish he caught and posting that picture on here.
"O" I did see the one you got , it is the 5th from the left side in the top picture. :lol:

BowGarGuide and I hit the river again yesterday and had a good day. We met up about noon and went to the lake to get some bait.

Ron has the kayak cast net throwing down to a science.

We hit the river and paddled down to a creek we have been want to explore for awhile now. We paddled up the creek about 4-5 miles jumping many log jams along the way.

We had a great day just paddling and exploring and fishing. We practiced heeling the boats to turn faster, paddled backwards and just generally had a good time.
We ended up catching a nice mess of fish because where we fished I nobody has fished this creek for a while because of the logjams. I am in trouble with my Daughter because I took the boat i just finished for her yesterday to give it a good try-out and now it is filthy and has it's first of many battle scars.

nice looking catch i wish i had been there to help you. :wink: :lol: i guess they will be good in the pan.nice trip report ron & darrells thanks for sharing. i guess there not a sinker but that looks like a nice floater pine or cypress log to the left of your boat ron . better watch out for tick & keith .they might be running low on boat mterial. :lol:
T

the one sticking up is osage a hatchet just bounces off.
ron
W

Dang Ron,
I usually have a cast net tied to my arm when I throw it. Hope it is tied off somewhere or is it that you can't throw it far enough to lose it throwing it sitting down?
Bob
T

Bob
It has a float on the end of the line and we are pretty shallow.
Ron
C

bob t rat makes everything look easy. i can,t even throw one good standing much less sitting down in a boat. i just hope he doesn,t catch onto something bedside bait in his net and & have it tied to his boat. :wink: :lol: :lol: he might go fer a good ride.
O

Ron is a man of many talents and he can even cook up a mean Frito pie.

You guys did do some brush busting judging from the looks of the daughters boat. You can always tell her it helped furnish supper and the only way to make sure it is just right for her is to take it on a shake down paddle so you feel safe for her having and using it.
I would suggest cleaning it up some before she gets it. :wink:

I keep saying that is the pleasure of the boats we make , we can get into areas where others have to turn around and just wish they could get in there. Even just river traveling we can get into campsites where no one else can letting us get away from the crowd and have some free space. If you have to scoot over a log or two you know you are in a good ( not used ) area.

One question.... What were the little silver fish in the net you guy's were using for bait? Down here we normally use worms , a chunk of meat or fresh water clams for bait when going for catfish.

Chuck
Those are shad about 1 1/2 long ,best bait I know of. Throwing the net sitting down is a blast and sure helps with the bait catching. I looked at the pic Darrel took and the ole T-V didnt even rock enough to make a wake when I threw the net.
JD you can see how high I am sitting in the boat.
Ron
O

tx river rat said:
Chuck
Those are shad about 1 1/2 long ,best bait I know of. Throwing the net sitting down is a blast and sure helps with the bait catching. I looked at the pic Darrel took and the ole T-V didnt even rock enough to make a wake when I threw the net.
JD you can see how high I am sitting in the boat.
Ron
Click to expand...

I noticed that , not a ripple from the boat as you tossed the net... I am liking what that boat can do more everyday. Now I understand why it is your favorite. I got a good understanding on the Brazos with you and more each time I see it in use.

Catfish and Bob.
The cast net isnt tied off ,just a float on the end.
I can see myself netting a 7 ft gator gar ,so I dont tie it to anything. If its big enough to pull the net I will just chase the float.
Ron
O

tx river rat said:
Catfish and Bob.
The cast net isnt tied off ,just a float on the end.
I can see myself netting a 7 ft gator gar ,so I dont tie it to anything. If its big enough to pull the net I will just chase the float.
Ron
Click to expand...

Down in the Glades section of the 10,000 islands there are a lot of narrow back creeks and a good place to get bait fish with a cast net. It's all salt water in there and Uncle Bill was going to get a lot of fingerling mullet for us to us for Snook and Tarpon fishing.

Well Bill went to a good spot and tossed the net to get the bait fish. The rope from the net was attached to his wrist. He got something besides a bait fish. He gave the net a tug and what ever was in there tugged back and then the dam thing took out for parts unknown , dragged him along the sand bar and then out into the water.

All the time he is trying to let loose of the net and he can't..... Finally , what ever it was slowed down for a second and he got a knife out and cut the line before IT started going for more parts unknown to us but only to it. As Bill told us later ... That dam $%^#@*&% thing had me skiing underwater and going where I did not want to go.

We think it was a really big Jew Fish or a Shark since both of them have been caught in that area with brush lines and even on rod and reel line. Some just spooled all the line off the reel and as far as we know they are still going.

Later I caught a shark in that area that was longer then the 16 foot boat we were in. After an long battle ( several hours) he just bite the line and swam away. Jew Fish or Grouper in the several hundred pound category were normal.

From that day on ... no one we know has attached the line of a cast net to there wrist.
O

By the way.......
The fingerling Mullet ( about 6 to 10 inches long ) are good bait and if nothing is hitting them.. The off with the heads , scale and gut them and introduce them to a frying pan. The bait becomes the meal.
They are almost as good as fingerling catfish of the same size. I do love a big platter of either of them with some Hush Puppies and a good garden salad , some grits and a cold beer does not hurt matters.

Chuck....
That's Salt water mullet , not the fresh water ones they SUCK.
D

Another one: at the moment of launch

Just guessing here.....
Ron is tossing a good 4 to 6 pounds of lead on that net ( thinking it is a 6 foot net and not knowing who made it ) , plus his body movement doing that and the boat is rock solid.
T