Seriously debating whether I'll go paddling in Lake Verret in summertime anymore. Another run-in wiih a big gator..... guessing 11 + ft. long. Paddled a couple miles down the shore to Elm Hall Manag. area. I saw a few smaller gators and proceeded to "educate" them about being around people. I sent a few .22 pistol shots across their bows to scare them a bit.
That worked OK for the smaller ones, but not for this big guy. Lately I've been banging the paddle on the cowling, hoping to scare the gators away as I paddle along. As I approached this 11 footer at 20 yards, the banging seemed to arouse his interest. At 15 yards, still not spooking him. Still looking at me with his head turned to my left. Out comes the .22 Ruger and I sent a shot 6" over his head that hit the water 4 feet behind him. No reaction.....none. Next shot was less than a foot in front of his nose. No reaction. Next shot was a foot behind his head. No reaction. The last shot hit a foot in front of him and skipped an inch over his head. Only then did he SLOWLY go under......seemingly unpanicked.
The big guys don't seem intimidated by people in the least. Not good for a kayak paddler sitting at water level.

Well,anyway, here's a pic of the "black water" coming out of the swamps after Hurricane Issac. 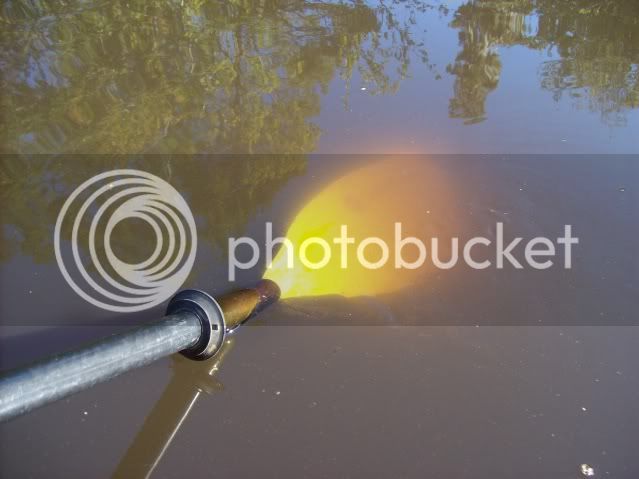 A pic of 6 footer that was taught a lesson for possibly coming too close. 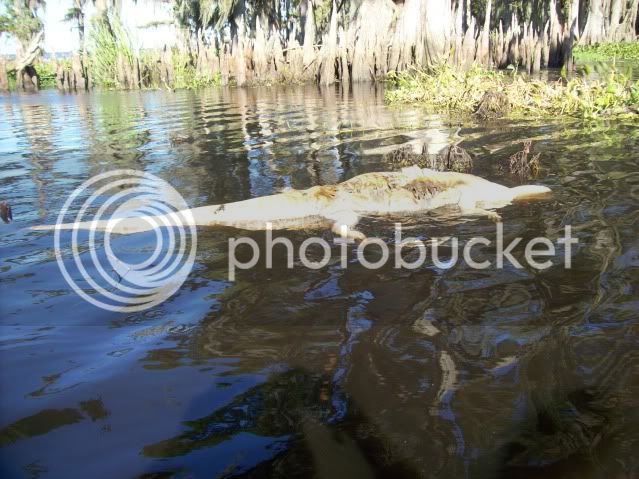 I came across this interesting looking slough on my way back. 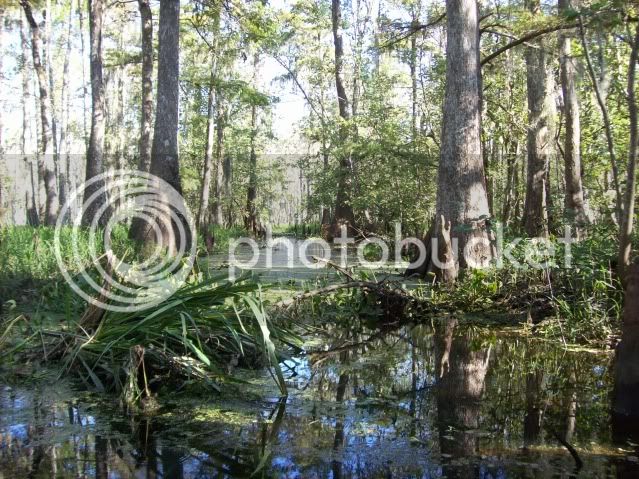 Ordinarily I'd love to follow this thing and see where it leads. The thought about meeting up with a 12 foot ornery gator face to face in those narrow confines had me thinking twice on that idea. 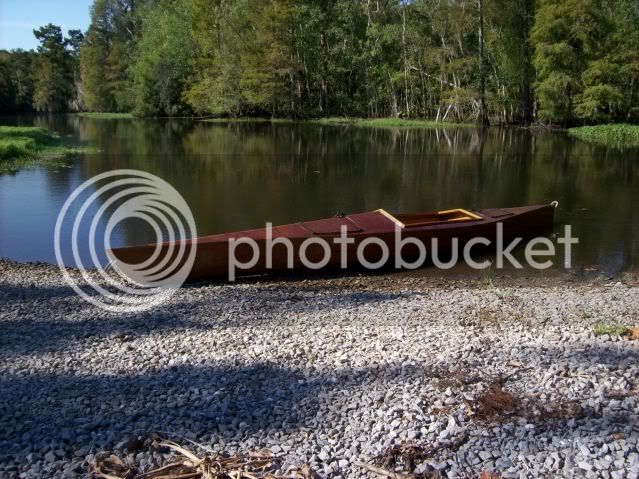 See any fish kill from the storm. Dead fish may be gone by now. I heard there was some, but mostly shad, etc.

Let those gator hunters know about the big boys there on Lake Verret. In fact one show I was watching Troy and his son were hunting Lake Verret.
J

Bee, I didn't see any signs of a fish kill. The water is black in the lake and the surrounding bayous. Not good for fishing in my experience.

Chuck, Troy Landry has the tags for the property in the area I usually paddle. I've seen his sets before, but none today.

joey they do make a better atitude adjuster called a rifle ? you can get closer with your aim. :wink: :mrgreen: you could could say you was troy. :lol: yea i got to admit when you see one probaly from six foot on up especially that size it does give you seconf thoughts. :shock: :shock: looks like some pretty water.
K

I'd stick with a handgun. You can swing your arm in a mich wider arc while sitting than you can your shoulders. Rifles have about a 100 degree arc of fire while sitting.
Practice shooting your handgun at longer ranges if you want accuracy. I used to shoot beer cans at 100 yards. Hit them only 2 out of 10 shots, but had 10" groupings.
You can be pretty accurate with a handgun, with some practice.
J

Catfish, the shots did go where I aimed them. Really don't want to mess with Wildlife and Fisheries guys for killing a gator..............well at least not on the open lake where they can see you. :wink:

Six footers don't bother me. The 11-12 footers with an attitude do. And a 12 footer is definitely NOT just twice as big as a six footer!

He might of thought you were a sexy lady gator and was coming to call on you. :lol: On the flip side he might have a taste for Cajun food that is home delivered to him. :roll:

Either way it is one of those pucker moments and What am I doing in here. The ones in the Okefenokee are as long as the canoes (16 feet ) and they do not move for you , you have to go around them unless they are sunning on the bank and then they slip into the water and you wounder just where in the hell did they go. On the way to Cravens Hammock it has some BIG BOYS that just lay in the weeds and eye ball you , making you paddle just a Little harder to get past them. That run up there is not that wide or that deep.

We had one in front of us that would surface and do all sorts of weird things in the water and then go under , looking for him , he would surface in front of the boats and act up again , then vanish. He keep that up for a good quarter mile before just dissapearing. It sure makes your head swing around looking and sitting really light in the canoe.
I

Personally, i think there may be something to the possibility that lots of camera crews feeding gators, Troy and his creativity-challenged crowd being in the area way toooooo much and lots of locals and townies going out to see and feed the gators has created this problem. Remember how the bears act at the big western Nat'l parks? piper
J

Piper, you're probably right. When a camera crew NEEDS to have a gator somewhere, they see to it that it's there. No doubt some dummies actually feed the gators to keep them around.

An interesting note. My 91 year old mother grew up next to the bayou..........sometimes actually IN the bayou. Water 2 feet deep in their yard, and in the neighbor's yard, and in every yard in the neighborhood.....sometimes for a month or two every year. She never saw an alligator growing up. I didn't see my first one in the wild until I was about 20. Once put on the endangered list, the population just skyrocketed.

The area I relocated to, the Cinco Ranch area of Katy, TX is truly a melting pot. Lots of people from all over the world brought here primarily for the Energy Industry. Unfortunately, the Discovery Channel et al is the only introduction for many of these people unfamiliar with southern wildlife. That's how you get this: YouTube video
More proof that common sense is not a pre-requisite for a college degree.
W

Remember the tree hugger in Japan a good while back that jumped into the Panda enclosure to go hug a panda? He wound up in ICU. Folks need to leave wild animals alone.
Bob
C

makes me wonder where mom gator is? :?: after a few more sandwiches he would be big enough to eat :wink: :mrgreen:
You must log in or register to reply here.
Share:
Reddit Pinterest Email Link
Top Bottom