Its been a while since I posted a trip report so here goes,

I have been hearing reports back channel about squid turning up here in numbers and lots of locals "in the know" have been getting into them. Its been a long time since I have been squidding and i have been craving a feed of calamari for a long time.

after a quick stop in to a local bait and tackle store to get a few squid jigs and to pick the blokes brains a bit, I put in at the Hervey Bay marina on a classic Queensland Winters morning, Clear Skies and water, little wind and a nice cool 60 degrees f 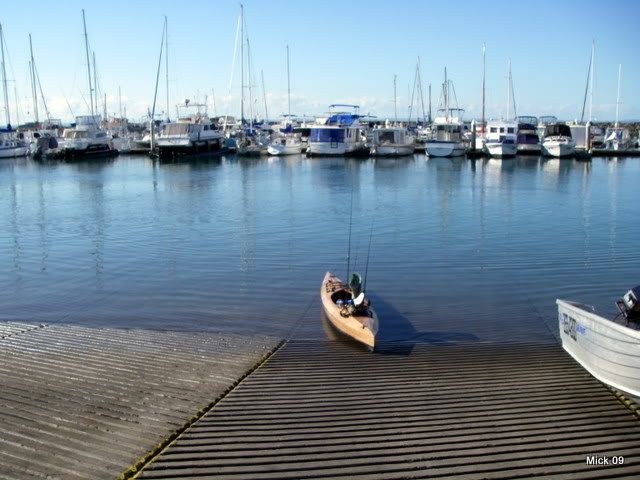 It just doesn't get much better than this. 8)

On the way, out of the boat harbour, I passed a bunch of sea kayakers who were headed off to the island for a weeks camping'

after a quick how do, I headed out the boat harbour and generally North east in the direction of Fraser Island, about 11 miles away.

first island one comes to is Round island, probably about a mile and a half from the harbour. 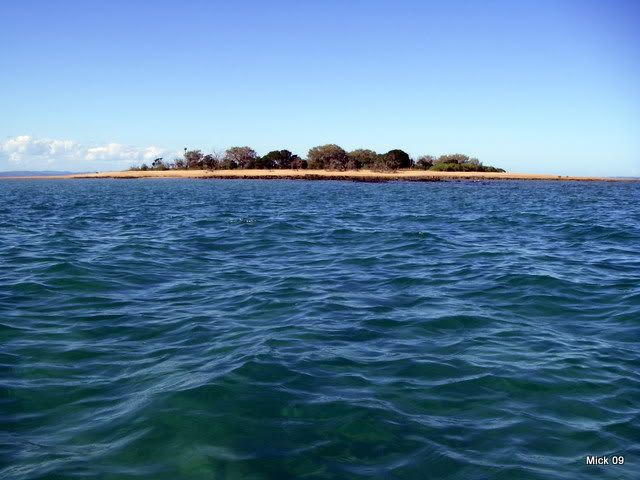 Then across coral and rock reefs to Big Woody island, about another 3 miles away, tossing my lovely new squid jigs along the way. 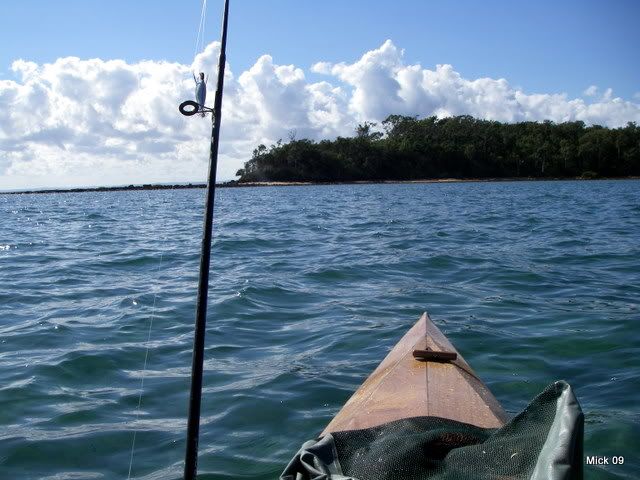 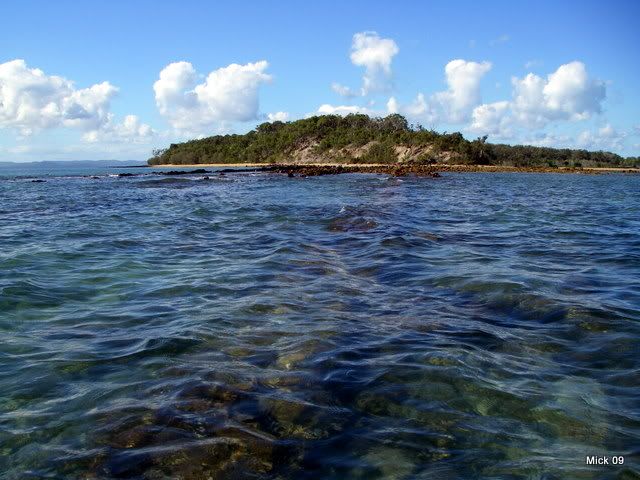 and into a lovely little sandy beach for a quick cuppa. and just sit for a while and take it all in. 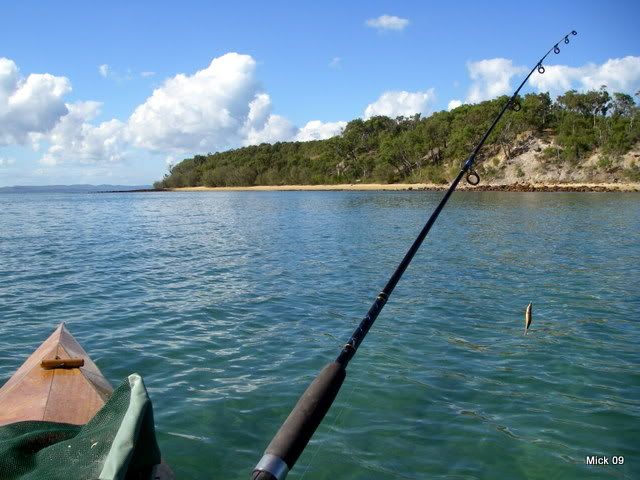 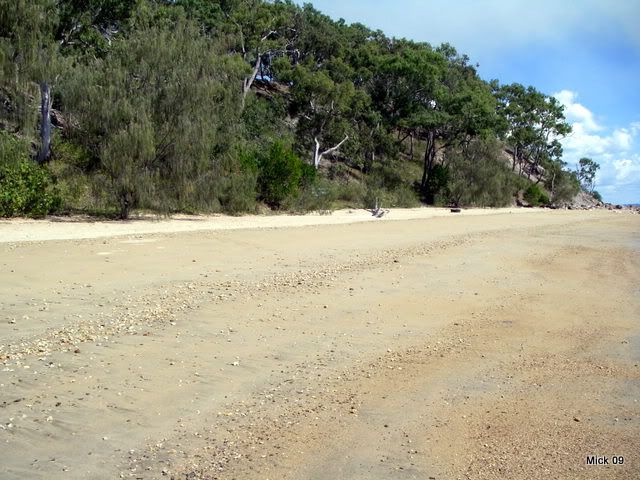 The water around those islands sure looks like some good snorkeling ( diving) areas.

G'day guys and very sorry about the delay here, life has been getting in the way.

I worked the edges of the reef and drop offs with my squid jigs to no avail, but solid blackall
http://www.fishingherveybay.com.au/imag ... sh0016.JPG
kept bloody monstering my jigs.

In desperation I changed to a more appropriate lure for these very good eating fish and on the second cast, a bloody squid nailed it. :shock: Of course the hooks pulled so back to my jig and it no sooner hit the water and this bloke grabbed it. 8) 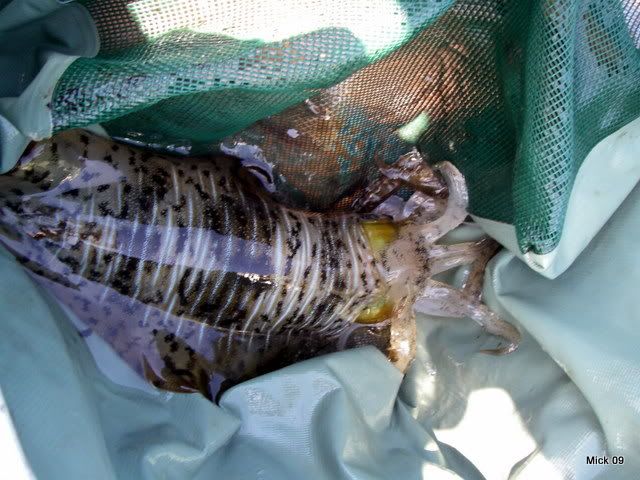 Only about 2 pounds but enough for me. 8)

Now, i haven't caught a squid in years and forgot how bloody dirty they can be. As I netted him, he let go with a squirt of ink that got me in the face and all over. My lovely kahki Columbia shirt is now a sort of black and tan camo pattern. as is my favourite hat I got most of the ink of my yak but never mind. I had squid in the cooler - you little beauty!

After I had a swim and a bit of a clean up, I headed home one very happy chappy . 8) just a couple of shots i took on the way home. These are looking towards Hervey Bay as I crossed the reef flats. Goodness I love this place. 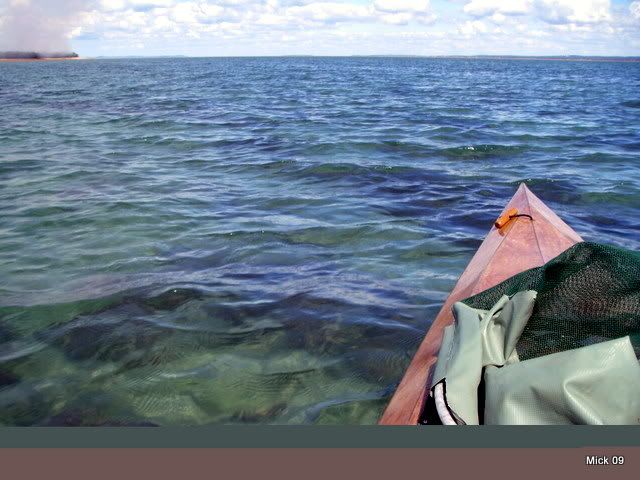 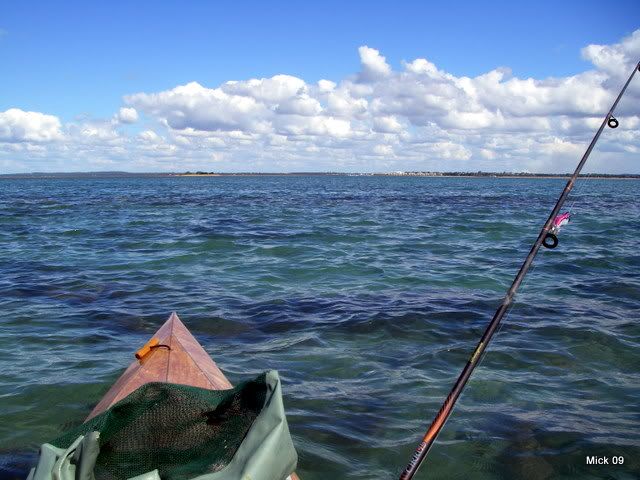 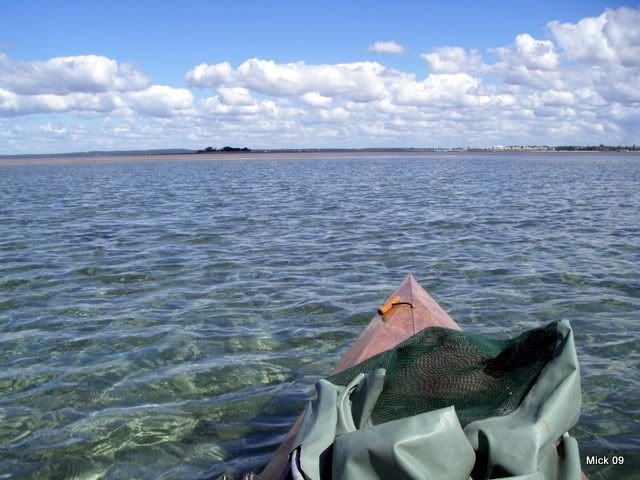 how do you clean a squid? any parts you don't eat?
B

A few days back I tole myself ta start a new thread askin' how come no pichurs frum downunder. Like so much in my life, I fergot. Such purty water. I never paddled way out in the ocean by myownself. If ya jest paddled way out (not ta the island), do ya have problems with big motor boats, currents that mite take ya to Gilligan's Island, places where sharks swallow kayaks? If ya paddle out past the reefs do ya git big swells, like the kind where when yer down in the bottom of one, the only way ta see the sky iz ta look straight up?

I reckon it iz hard ta find yer way back once ya paddle out so far ya caint see any land. Do folks paddle kayaks way out in the ocean down there, out where ya gotta compass 'n a way ta figger out the stars?

ps If Ole Tom Hanks kin use a porta potty door 'n some logs ta cross the ocean, a fella in a kayak with a 10 pound bag of grits oughta be able ta reach Borneo 'er the Seychelles, rite? [grin]

Still, if you will not fight for the right when you can easily win without bloodshed; if you will not fight when your victory will be sure and not too costly; you may come to the moment when you will have to fight with all the odds against you and only a precarious chance of survival.  There may even be a worse case.  You may have to fight when there is no hope of victory, because it is better to perish than live as slaves.  Winston Churchill
K

If there ever was a more beautiful ocean than the Pacific, I haven't seen it.
J

Great pics, Mick. Us Cajuns are known for eating some mighty strange stuff, but that thing :shock: I might have to pass on. But------ a little onion, celery, bell pepper - maybe some garlc------- hhhmmmmmm-- might work. 8)
J

seedtick said:
how do you clean a squid? any parts you don't eat?
Click to expand...

Squid is to Calamari as Pigeon is to Squab. Calamari is GOOOooood.
O

Kayak Jack said:
Squid is to Calamari as Pigeon is to Squab. Calamari is GOOOooood.
Click to expand...

Ya do know the 1st person to eat one of those had to be starving and could not locate any real food. All entrails ( guts and anus ), very little meat like real food has.

Kayak Jack said:
Squid is to Calamari as Pigeon is to Squab. Calamari is GOOOooood.
Click to expand...

There ya go!
B

Where iz Swampy when ya need him?

A nation can survive its fools, and even the ambitious. BUT cannot survive treason from within. An enemy at the gates is less formidable, for he is known and carries his banner openly. But the traitor moves amongst those within the gates freely, his sly whispers rustling through all the alleys, heard in the very halls of government itself. For the traitor appears not a traitor; he
speaks in accents familiar to his victims, and he wears their face and their arguments, he appeals to the baseness that lies deep in the hearts of all men. He rots the soul of a nation, he works secretly and unknown in the night to undermine the pillars of the city, he infects the body politic so that it can no longer resist. A murderer is less to fear.  Marcus Tullius Cicero
W

I don't reckon that I have ever eaten squid. Does it taste like chicken?
Bob
K

G'day guys, and thanks for the nice comments.

Hervey Bay is about at the southern extent of any coral reefs here. There are a few patches of coral further south but not much. As such, the coral even here is pretty sparce and consists of clusters of it clinging to rock sub structure. Still very pretty.

I never paddled way out in the ocean by myownself. If ya jest paddled way out (not ta the island), do ya have problems with big motor boats, currents that mite take ya to Gilligan's Island, places where sharks swallow kayaks? If ya paddle out past the reefs do ya git big swells, like the kind where when yer down in the bottom of one, the only way ta see the sky iz ta look straight up?

I reckon it iz hard ta find yer way back once ya paddle out so far ya caint see any land. Do folks paddle kayaks way out in the ocean down there, out where ya gotta compass 'n a way ta figger out the stars?
Click to expand...

Bear, there is nowhere in Hervey Bay where at least Fraser Island is not in sight. It is a huge island, mainly sand and has some of the highest sand hills in the world. (that is our claim, anyway) The island dominates "the bay' as we call it and stops all but the very worst of ocean swells getting into it. It can still get very rough in there when wind and tides oppose.

The mainland part of Hervey bay is mostely low, flat country and little can be seen of it from the northern end of Fraser Island. The standard plan is to keep Fraser behind you and you will eventually wind up on the mainland

Re sharks, no shortage of them here but I am unaware of anybody ever being taken by one. Humpback whales call in here every winter to rest up on their migration between Antarctica and our Great Barrier Reef where they give birth to their calves. The mothers will spend several months resting here and feeding their young in preperation for the trip back south. Great White sharkes and tiger sharks follow the whales - though Tigers and Bull Sharks (we call them Whaler Sharks) are here year round.

Re the squid, Trust me. They are bloody deliceous!! I eat the body and tenticles. Usually crumbed and deep fried. If you ever get the opportunity, try it. Sweet, white meat, though it can be tough and rubbery if over-cooked. Cuttlefish is better. , baby octopus even better again though it has a stronger taste/.

Next one I catch, i will do a thread on how I prepare them for the table. 8)
S

Looked at that pick of the squid. . . 2 lb's? . . . that be a nice size. . . but I don't know much about squid around your corner of the world. . . My only dealings with squid have been the Mediterraean ones and that was twenty years and more ago. . . We used to stand on the rocks in Naples Bay and use squid jigs on a hand line. . . Whenever we got a nice bunch, I had a landlady who would turn them into a spaghetti dinner for me. . . As Jack calls it, Jarvis good eatin'. . .