Stitch and Glue No Plans

Very nice work. The cedar strips make for a very pretty boat. You will have a lot of questions to answer at the launch site. Building by hand and eye is very rewarding. Thanks for sharing your build and what you learned with us.
T 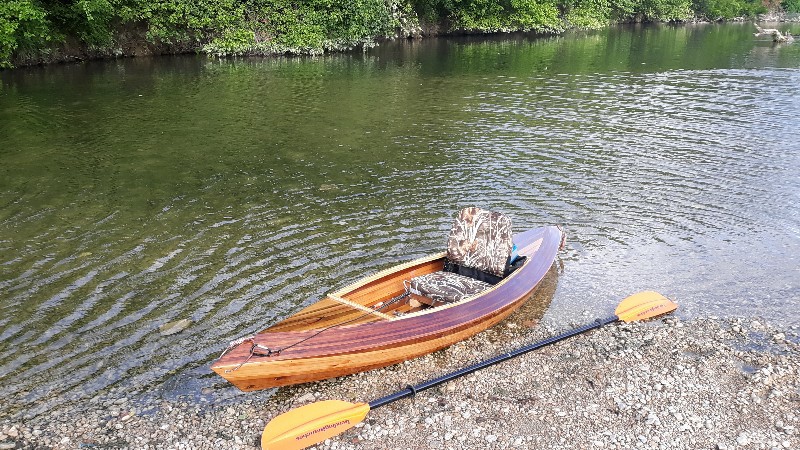 I have been fighting this picture off and on all day, here it is.Dont know where I was going wrong, but I lost all the fancy words I had typed. The short fat wuhan pirogue is slimed. if two small bream count. Handled about as expected, the long kayak padde stayed on the gravel bar, Make no mistake it is a small boat. I usually carry two poles ice chest and small tackle box. You'll notice the ice chest stayed home it will fit fine, just didn't want to croowd it up first trip. I used my 6"seat, it was ok but probably will fish with just the seat no platform. The biggest gain was loading and unlooading, it's handy enough to carry if needed. I think the Inverted V bottom is more stable,but didn't coast real well. Tracked ok. The river was too clean to eave a scum line, but feeling over the side, I'd guess the draft is about 4 inches. Next one will be 1.5 feet longer with less deck. This idea was a good compromise for a 77 year old geezer. I'll definitely do another one.

Andy, decreasing your load is a good idea. Simpler is easier. And on the next boat, using less wood for decking and adding it for length is a good idea. A semi decked, solo canoe is an all around set of least-worst compromises all combined into one package.
B

Boats always look even better on the water.
Every boat is a compromise. Making those compromises fit your goals/criteria is the fun part of designing and building it your way. Sometimes we have to compromise our usage (leaving the ice chest) because of those changes. The more we require from a design the harder it is to be successful. Hence the next build.
Seems the farther from "normal" I drift the more I see why "normal/usually" is the way it is.
For Jack a solo canoe is a good/normal choice/compromise. In Louisiana a 12' pirogue for one person or a 14' one for two people is pretty much standard. Changes can be made to improve these boats to fit certain criteria better but some other feature/function will be compromised.
I think the boat is great. The light weight and short length will make it a great fishing boat.
Last edited: Jun 24, 2020
K

A good rule of thumb is this. Find out what people in your environment and similar environments around the world are using for your situation. Chances are you will find a boat design that has been perfected over hundreds or thousands of years. People scratching for a living can't afford to fool around with a design that doesn't work.
K

Something that astounded me was when I saw the extreme similarity in a Greenland kayak, to the kayaks of the Alaskan Aleuts. The cross section of the hull was a bit different. Alaskans used a soft chined, semi rounded bottom. In Greenland, they had a harder chine,

3,000 miles apart, no communication, developed and designed independently from each other, and that’s the only, major difference! Obviously, they worked out the solution for the situation.
J

Jack, they probably would have been even more alike if the Aleuts would have had access to the same materials.
K

I wondered the same thing. Certainly, available materials impose limits on both designer and builder. I would also expect that designs that proved successful (and, just returning from a hunting expedition out in the ocean has to qualify as a success), would have a strong vote. I’ve never built a boat out of sticks and bones that I first had to collect. So, availability, length, and strength of these sticks and bones.presents both opportunity and limits. Another influence may have been local style, or tradition?

Whatever all of the influences were, the final products were basically interchangeable. And, canoes followed a fairly similar pattern of similarity. And, frankly, our modern boats follow the parade pretty well too.

The modern Greenland style kayak paddle looks like it has evolved from ancient paddles made of scrap wood.
B

We tend to recognize that boat designs have evolved into what they are today but often fail to notice that they are still continuing to change. Whether we choose traditional, current, or"next best thing" depends on what game we choose to play.
Two biggest influences I see effecting paddling boat design and construction today are; Most boats don't live on the water so they need to be lighter and or shorter. There is a shift away from individual builders to manufacturing. Few people have the time, knowledge, skills, or suitable materials to build boats. especially to compete commercially.
Andy's boat is part of that evolution. He has already mentioned "my next build".
K

Talking with you guys is interesting as all git out. Thank you one and all.
O

Thanks to all who helped keep me on track during this build. We made it back "home" to Kansas. I'm guessing I'll try again asimilar boat a little longer and less deck,

after we get my better half squared away with medical stuff.