It's become a tradition with our Grand kids if they want to build a pirogue, 10 is the magic age. After that---- just work it out with parents and Grandpa and you're good to go. Mike is one of our several Louisiana grand kids,and is a student at the Shreveport Education Center for Autism. Mike had become very fond of one of our "herb lite" aka 17 lb pirogues, so when he turned 10, his heart was set on a aluminum SOF instead of the standard Uncle Johns Pirogue. About 2 years ago he and I set out to build his boat. The distance between Mike and ,I coupled with some old people ailments stretched the build time, but not our enthusiasm. The build started in La, moved to Texas, then to Kansas, but it's done now! I am so proud of Mike, he stayed enthused, closely followed directions, and completed the boat with very little hands on help from me.

This isn't so much a detailed "how to build post", but also about our journey together, I wouldn't trade it for the world.

We decided on a cedar strip/ fiberglass bottom, as the luan bottoms on previous builds didn't wear well. Recycled cedar fence boards for the bottom, a new cedar 2" x 6 x 14' for the frame, and a 25' roll of 12" aluminum trim coil, took care of the basic materials.

First step was to build a table. Sawhorses, 2x4's and plywood. 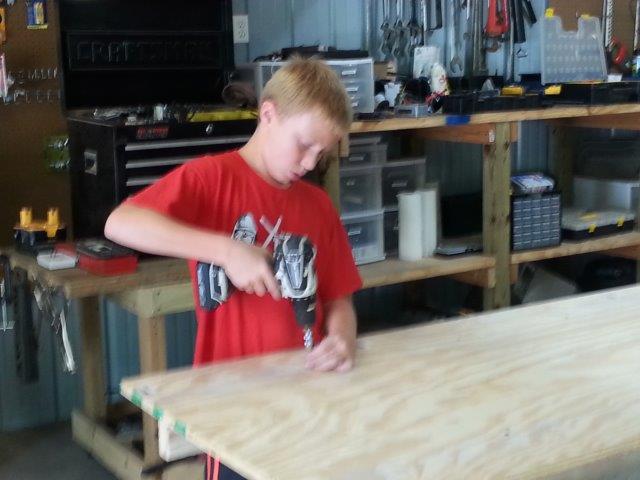 The cedar 2x6 was ripped to 3/4 x 1 1/2 about 14 feet long. These were laid out in the ladder shape for the framework with 45 degree slope a the ends. Total frame length of 12' so the 25' of aluminum fit with one foot left over. The cross pieces of the frame were glued in place with epoxy/wood flour mix and secured with T 50 stables for clamping. 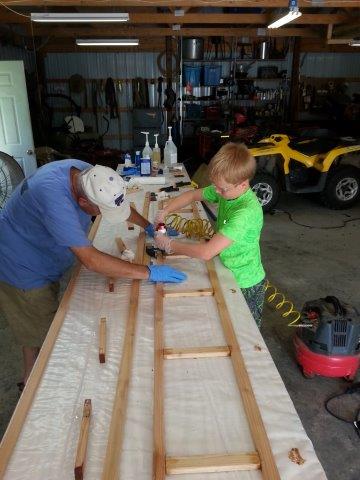 The stems (end pieces of the frame ) were trimmed. A thick bead of epoxy mix was placed on the outside of the frames and the pre trimmed to shape aluminum was stapled in place over the wet epoxy mix. 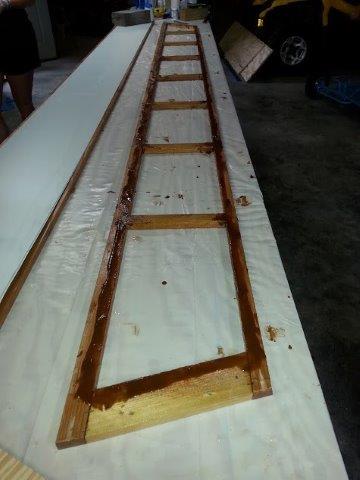 While that set up we moved on the assembling the cedar bottom. The fence pickets were ripped into strips and planned to 1/4" thickness. The ends of the strips were cut at 45 degrees across the wide side for joining (scarfing) the bottom to length. A sheet of plastic drop cloth was placed over a rough pattern of the bottom shape, them the strips were glued together and clamped in place by shooting brads through 1' X 1' sticks. The sticks are covered with packing tape to keep them from sticking to the glue. We used tight bond III for this step. 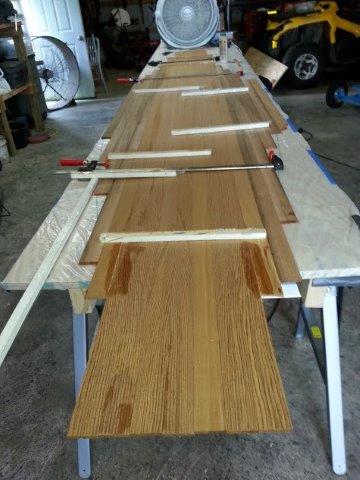 After the glue was set we removed the sticks and brads, and sanded the rough shaped bottom, and gave it a "saturation" coat of epoxy. 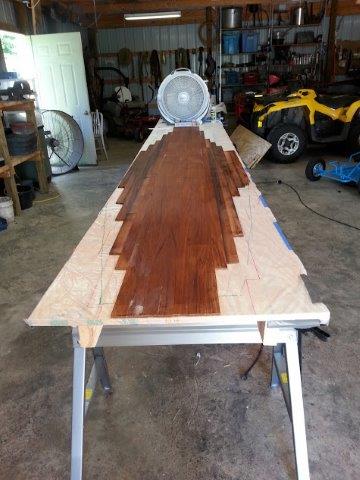 The bottom was then covered with fiber glass cloth and wet out with epoxy. The excess cloth on the edges was trimmed. 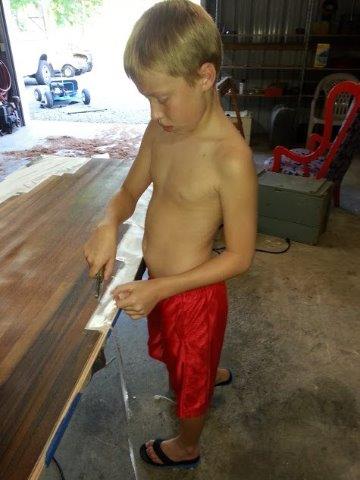 Now that we had the major components, it was time to put the boat together. The sides were bent around two forms, one of the forms was shaped to represent the transom and a wider form near the middle where the rib will go. The shape of these forms were "best guesses", the transom worked out fine, we had to experiment with the center form. In the picture you can see the ty wraps we used to pull the stern and bow in place. 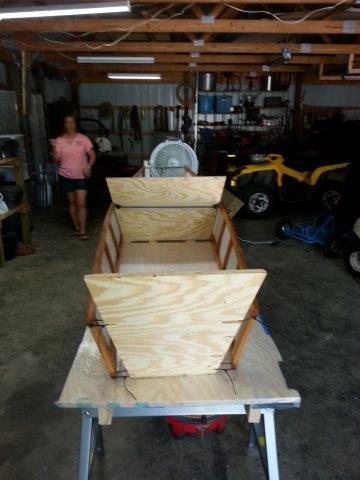 The bow was epoxy glued and screwed together, an uncle john type rib inserted in the middle, the transom replaced with a cedar one and epoxy glued in place. 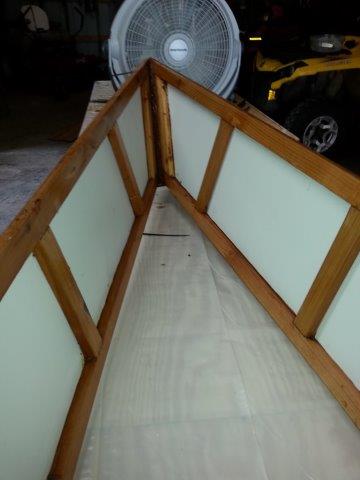 We turned the boat upside down on sawhorses, checked for square, and glued the cedar/fiberglass bottom on with plenty of epoxy wood floor mix. Clamped it in place with a brad gun.After the mix cured mike trimmed the bottom flush with a multi tool. Followed up with a belt sander and sanding block. 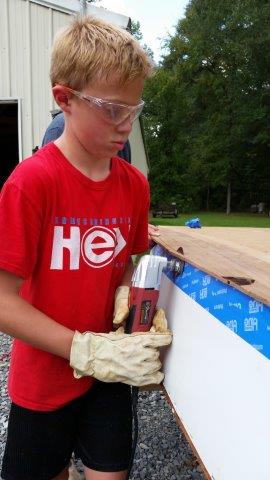 The forum will only accept 10 pictures/post so I'll try posting this and continue in another post or reply to this post.
To be continued

Now some more fill coats of epoxy on the bottom, inside and out. The bare cedar inside was also epoxy coated. 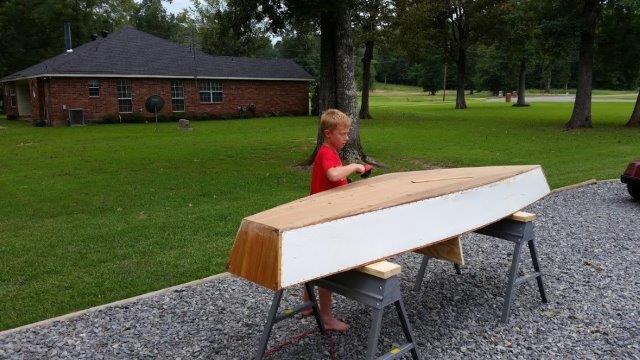 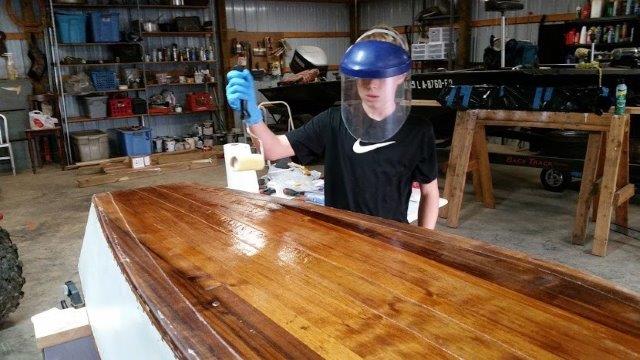 Notice Mike has grown a bunch in 2 years! He also is a fine young man.

Next the bottom was taped off in preparation for the graphite epoxy mix on the bottom. This took three coats of the mixture. 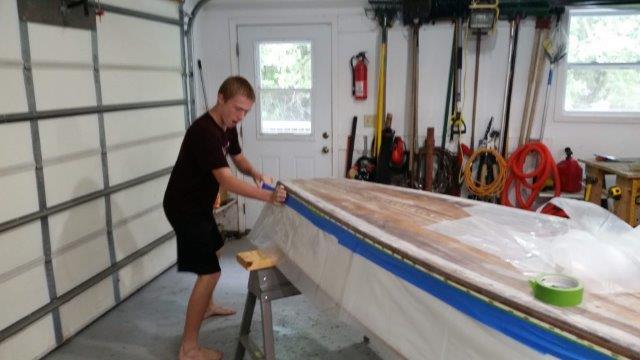 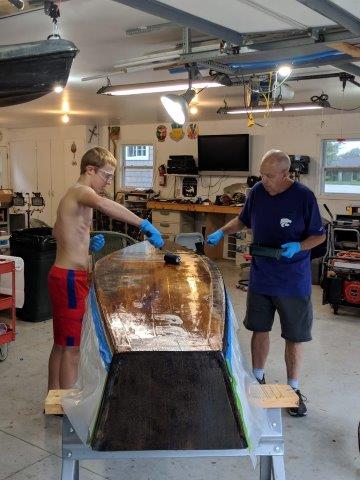 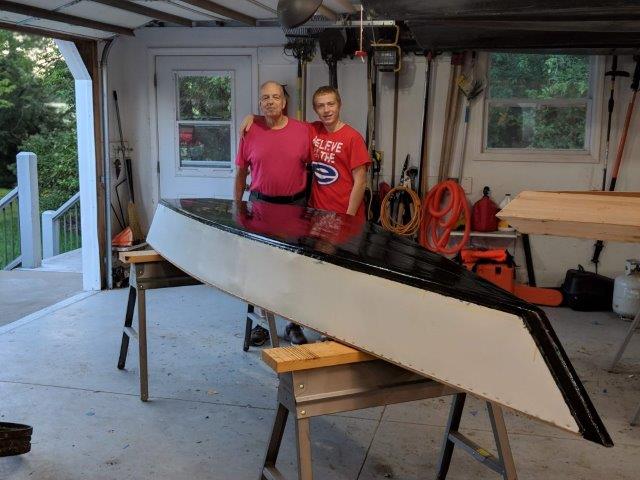 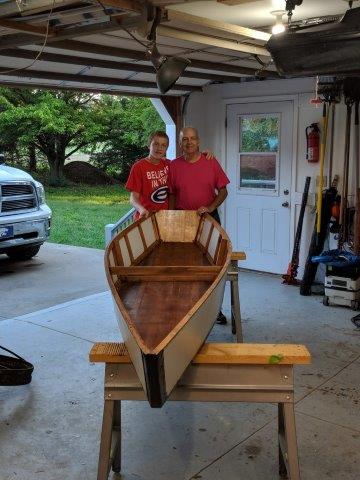 The pirogue is finished. Well almost, there is talk of a future deck and maybe camo paint in the outside. Mike has his very own boat, which will be well used by a terrific grandson who is greatly loved and appreciated by a proud grandpa!

Good on ya, Andy!! And good on Mike. Mike built a Grandpa with a boat.
O

You built a boat but most of all you built memories. Toss in friendship , trust and a young man who will remember this experience all his life and hopefuly pass it on.
M

Like Chuck said, he will remember this the rest of his life. I know I remember building things with grandpa over 50 years ago. Great memories.
W

Now we need a picture of him in his boat with a big grin holding up his first fish caught out of his boat.
O

That was the plan last week end. The epoxy wasn't set enough. However here is a picture of another first last Saturday a few hours after finishing the pirogue. 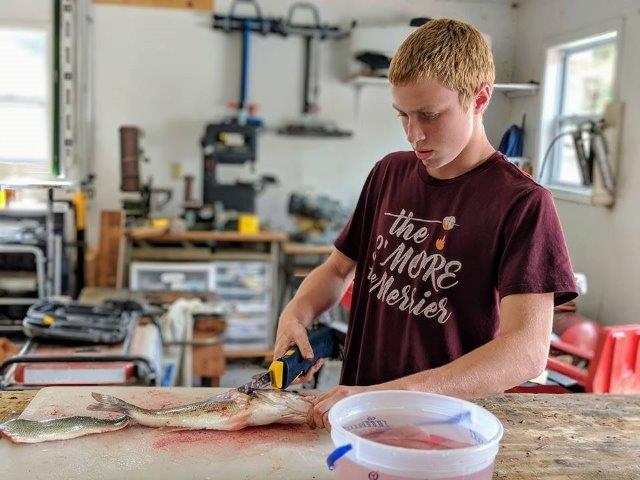 When I was still a tad, yet smaller and younger than Mike, Mom taught me a jingle to sing-song to the fish:
"Fishy fishy in the brook,
Come and bite upon my hook.
Mom will cook him in a pan,
And I will eat him like a man"!

If the fish still didn't bite, I'd haul in the line and pee on the worm. If that didn't work, I'd quit fishing, eat an orange, and curl up to take a nap.
Reactions: torch
T

Great post!
I know the boat is light and is advertised to weigh 17 lbs. but have you actually weighed it? I'm not saying it don't just wondering.

Bee,
I haven't weighed this one. One with a pine frame and luan bottom weighed 22 one with cedar frame Luan bottom 20. The stressed skin is tougher than I expected. BUT they are basic 3 panel pirogues, I have not been able to get enough flare to be as stable as a plywood uncle johns. I've satisfied my curiosity about the stressed skin.I was looking for an easy build lightweight kid's build. My opinion--- cedar stripped is better for light weight and versatility.

I think that others have reached similar conclusions. Cedar is tough to beat.
S

I'm puzzled by your statement ", I have not been able to get enough flare" . The pics show you building around two jigs (forms), one in the center and one at the stern. Increasing the flare on the jigs will increase the flare on the boat. Especially if you put in ribs to hold the flare once the jigs are removed.

Another thing to help hold the flare is to put in tapered stems. My stems usually taper about an inch or so from top to bottom, then I trim the sides of the front stem that will touch the sides of the boat to 30 degrees. On pirogues the rear stem has a similar taper but the side angle is cut to match the angle that the fits the sides as they touch. Putting in bresthooks and seats also helps hold the sides. I put in ribs before removing the jigs. With a ribbed pirogue, the side flare ends up matching the flare of the jigs. With a pirogue with no ribs, the sides straighten up (less flare) when the jigs are removed.
K

Installing thwarts will hold out the sides too.
T

Seedtick - thank you for your continued wisdom here. I think most of the long term members have seen your builds and posts and have a deep respect for your work. You are a treasure for all of us.
O

Seedtick- thanks for the explanation. The explanation about flare certainly is simple and make the basics clear in my old brain. I've never had trouble with plywood and have been able to change flare and rocker with stem angle and angle of the bow and stern. That success was a result of some of your previous post.
I'm guessing that the stress being applied to the frame and skin isn't "flexible" enough to allow the sides to bend. I've even tried a farm jack to push out the top rails and another jack to pull in the bottom rails to the form. That trick of course resulted in destruction of the frame. It's amazing how much energy is in the stressed skin. They were fun projects but I don't think I'll try another one.

Andy, was the aluminum glued to the side frames before, or after attaching them being to the bottom?
O

Jack the aluminum is glued on while the panels are flat. Then when the panels are bent to shape around frames the aluminum panels are "stressed" similar to drum skin or a fabric shrunk on an airplane. that's what makes the paper thin aluminum so strong. Herb Cootile had a good idea, I just decided I don't understand the overall concept enough, and there are many proven methods that I haven't to got to build yet. I would like give some historical methods a try.

There's probably a small range of flex within which the idea works well? But, too moch flex doesn't.
O